Welcome back to a new appointment with “Fairy Unchained”: as you can easily guess from the title we will finally talk about Kaguya's army of Wererabbits!!

The Rabbits of this espansion have some base stats that are a little weak which doesn't make them that attractive as Resonators... But we're forgetting a little detail: the Rabbits are moon creatures and so, using Moon Will, will be able to activate a series of special Abilities owned by the cards. 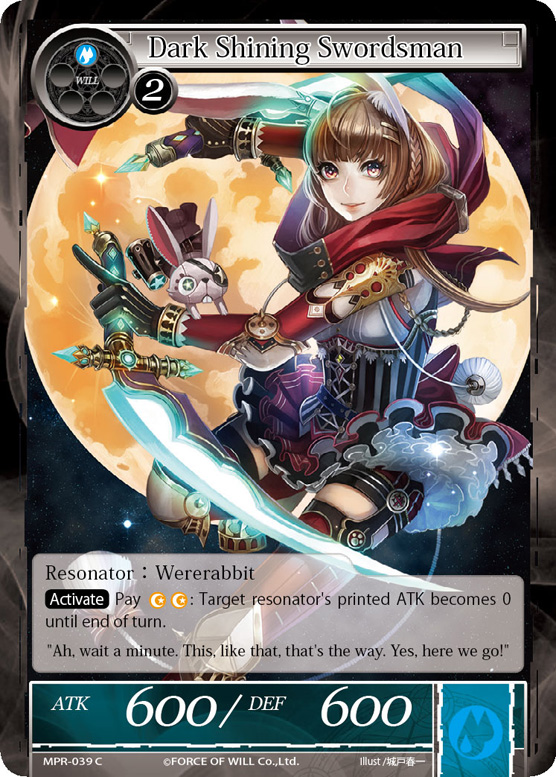 The Dark Shining Swordsman at the cost of two Moon Will will allow us to change the attack of a target Resonator to 0, letting us live those additional turns necessary to take home victory. 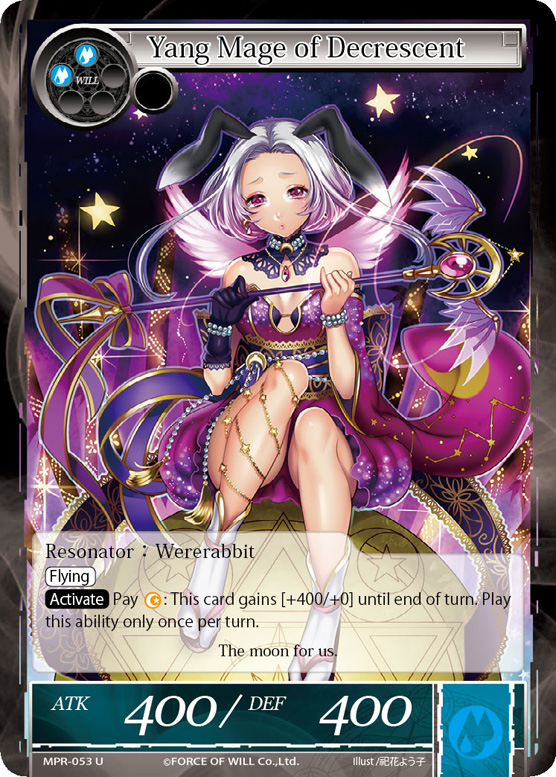 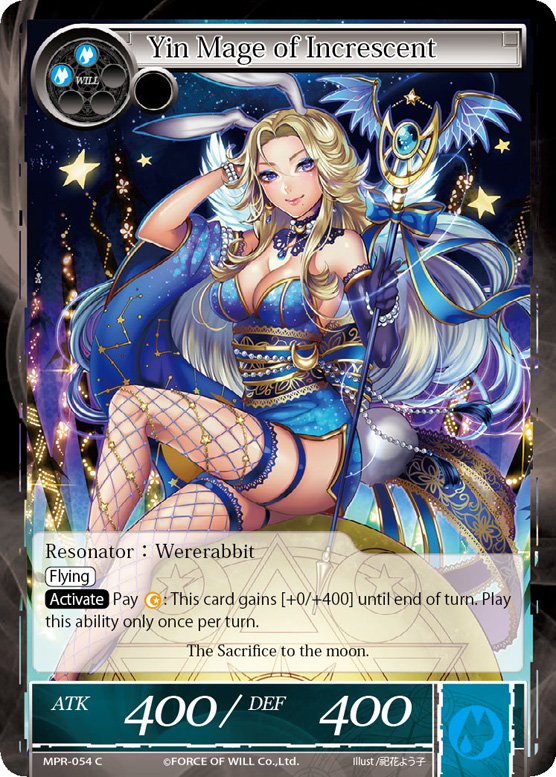 The Yin and Yang mages are two sides of the same coin: they have the same ATK and DEF values, they both have flying and have similar Activate Abilities: one raises his attack by 400 by paying a moon will, the other one will raise the defence by 400. 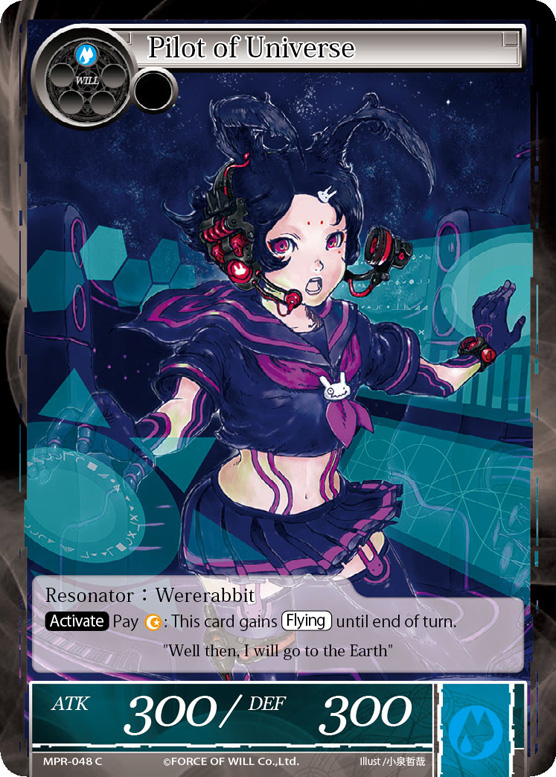 The Pilot of Universe is a 1 cost resonator that will gain Flying by paying a Moon Will.

As you can see at first glance there's apparently no real reason to play the Wererabbits of this expansion but I would like to emphasize that pratically all of them have or can gain the Flying ability, that coupled with the ability of the new Kaguya to power up almost all of them at once when doing Judgement, it will make them an almost unstoppable army near the end of the match if they are not kept at bay. 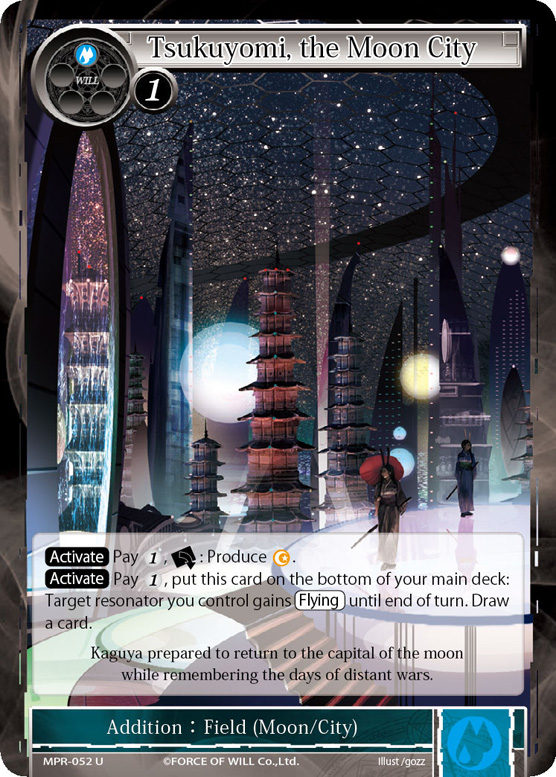 Tsukuyomi, the Moon City is the homeland of Wererabbits: it allows us to pay a Will of any attribute to gain a Moon one. Also, if we have the foresight of always being able to pay the cost of his second ability it will be basically indestructible because it will be able to go back to the deck giving at the same time Flying to a resonator we control.

The Rabbits so far can just fly over the battlefield without dirtying their hands but sometimes, when it's necessary, they know how to assert themselves on close combat with the help of a Spell: Chant – Standby made exactly for them: Total Eclipse. 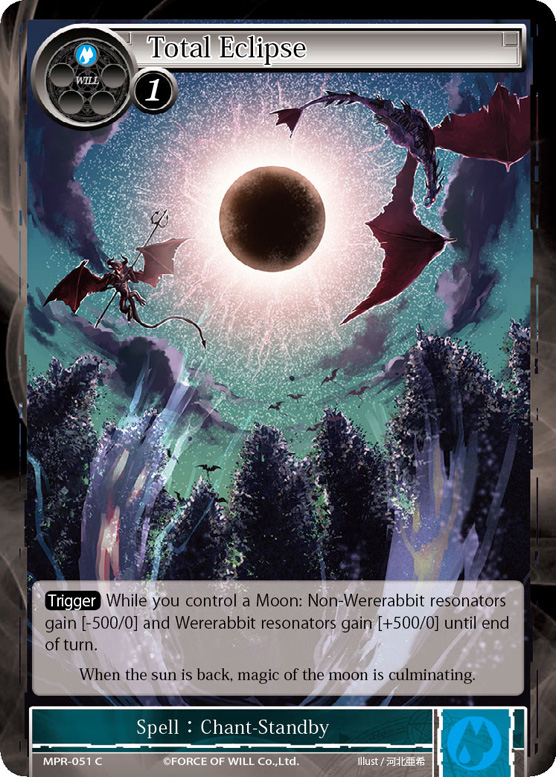 As long as we control a Moon we'll be able to at any moment give a +500 attack to all Wererabbits and at the same time give a -500 attack to all other resonatos, in a fight this can often make the difference between life and death.

Seen the "celestial" theme of this article here's a card that represents the whole galaxy! 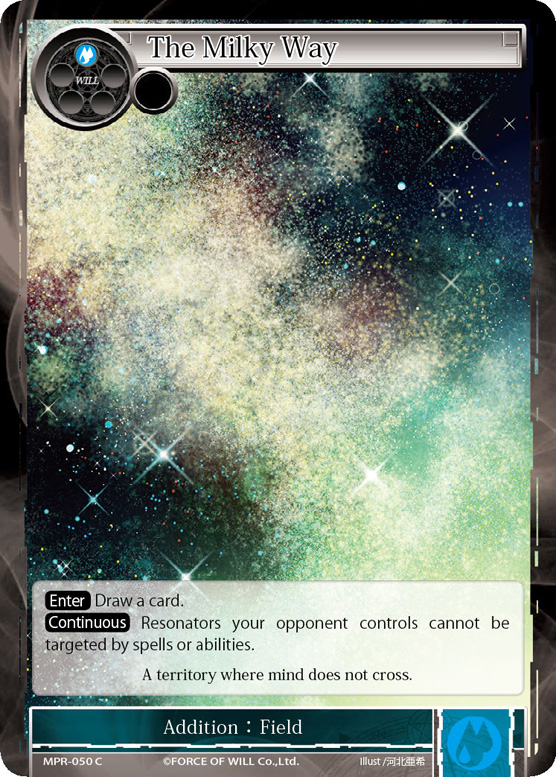 The Milky Way will allow us to play safer againts those decks that abuse Addiction: Resonator or versus Abdul, now the couples of Mephisto in the field will have to be played with a lot more carefulness!!! A card that gives both advantages and disadvantages, that surely requires a careful planning to be played, certainly Abel and all those cards that act on the opposing field without targeting the Resonators must be considered as synergic with this one.

Till next time with Fairy Unchained!!!