Hi all and welcome back with the spoilers of the new expansion of Force of will “The Moon Priestess Return”. In this appointment of Fairy Unchained we'll know one of the Six Sages that fought the first battle againts the beings of the Outer World: Fiethsing, the Magus of Holy Wind. 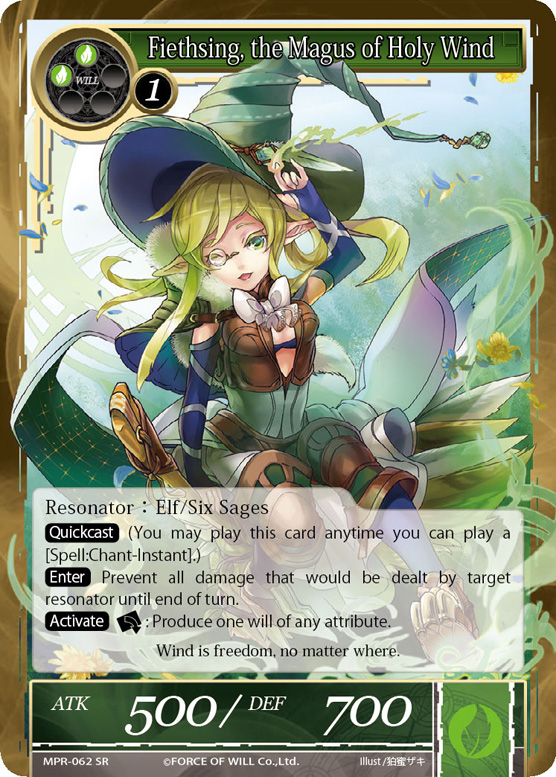 At the low cost of three Will, of which 2 Wind specific, we'll be able to summon this elf 500/700 on the field. We'll be able to do that in every moment of the game, thanks to the new ability Quickcast, and trigger immediatly his Enter ability, that protects us from the damage inflicted by a target resonator till the end of turn. Hers 700 DEF place Fiethsing in the category of resonators that survive Thunder and that will make happy many players, also because this will make a lot easier the activation of her third ability: exhausting her to produce a will of any attribute. In the end, with three will we'll be able to: block the attack of a resonator without taking damage and the following turn benefit of an additional will of our liking. We don't think to be wrong if we predict we'll often see this card on the list of top decks in various tournaments.

Fiethsing brings with her a new counter for the Wind: 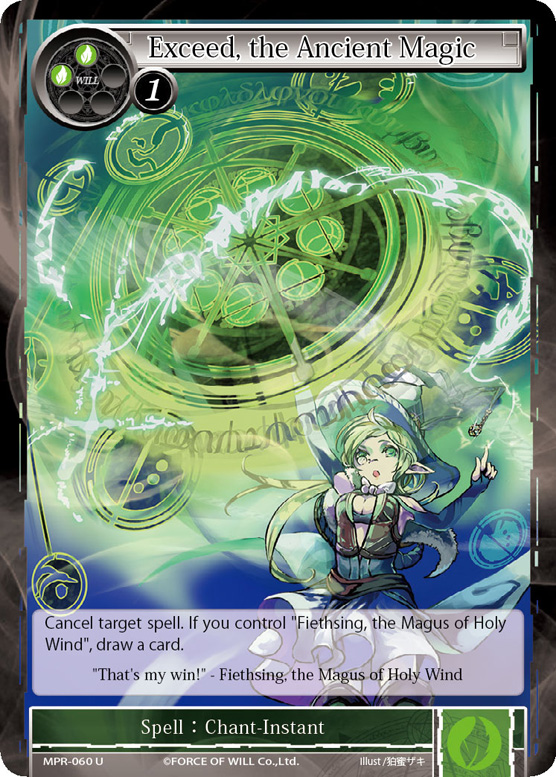 Exceed, the Ancient Magic costs 1 more will ( the one gifted by Fiethsing) of Cake Zone and Xeex, but it can cancel every target spell, be it normal or summon. Also, if we control the Sage of Holy Wind, we can draw a card. With this card on the loose, it will be even harder playing our card light-heartedly if our opponent has Wind magic stones on his side.

Damage control is a recurring theme and that is shown by the presence of the second card coupled with Fiethsing, the Addition: Field Barrier Field. 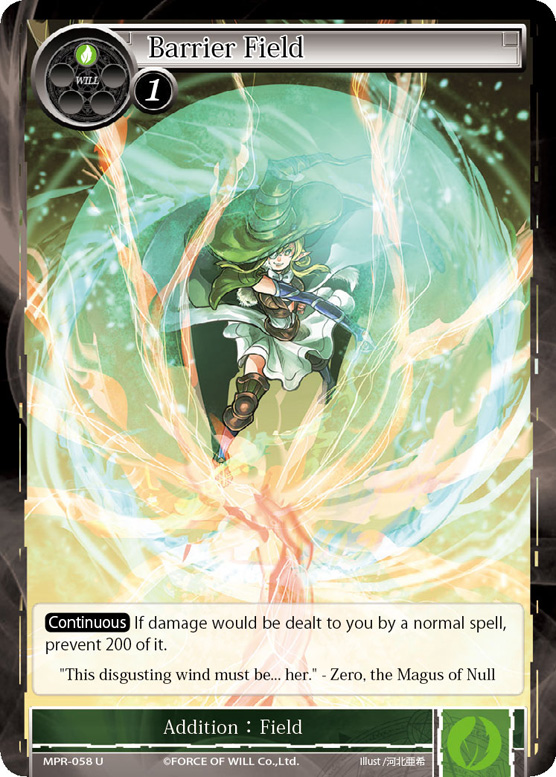 Preventing 200 damage by every normal spell that our opponent shoots at us could mean the difference between victory and defeat. Thunder, Purifying Fire, Dragon King's Flame will be less scary with this card on our side, especially with the change in rules that allows us to control more than one at the same time.

If you think what we've shown till now is enought, you're totally wrong. We still have time to let you know two resonators that probably will escort her in the next months. The first one is the Familiar of Holy Wind. 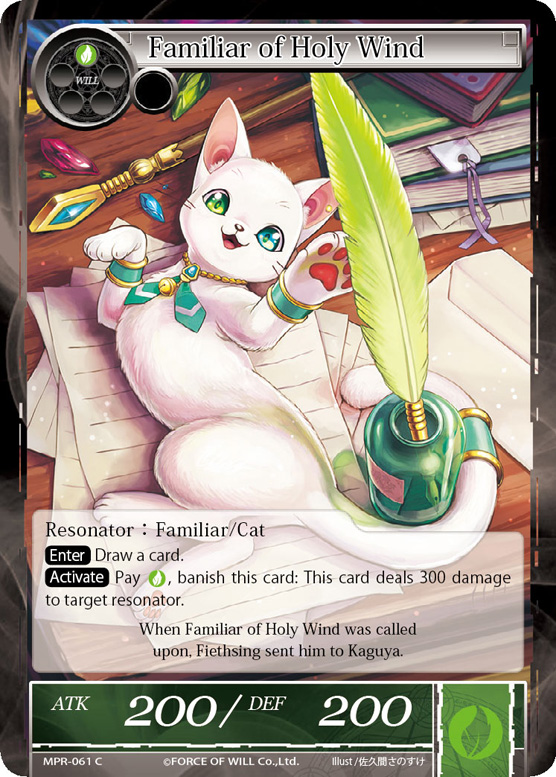 At the cost of 1 Wind will we'll be able to draw and summon a 200/200. By itself it's pretty normal. The real strenght of this card, for us, is his second ability, that at the cost of one wind Will it will inflict 300 damage to a target resonator. More than with the new Magus, we see this little cat really synergic with Simbad, because skipping the drae, we could activate one of his abilities and getting to inflict up to 600 damage to a resonator at the cost of 2 Will.

The second character that we propose is dedicated to the lovers of decks base on the Elf Race: 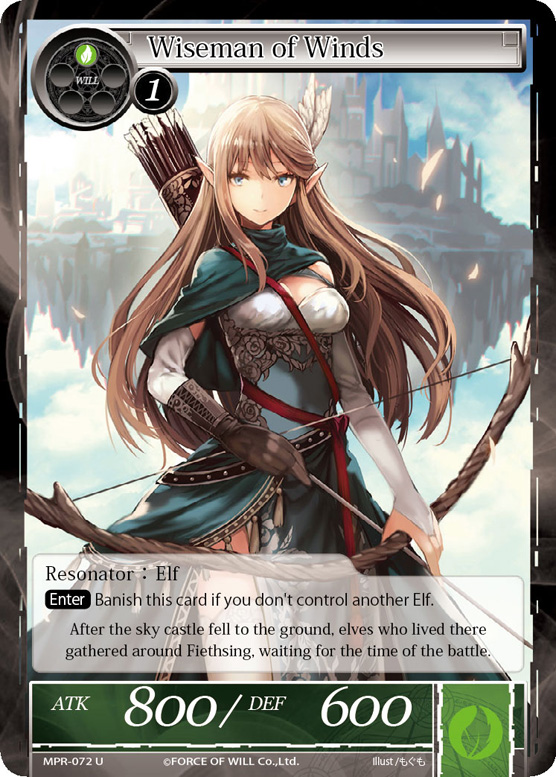 Wiseman of Winds express indeed his true potential on a deck that has Ruler/J-Ruler an elf, because this will grant us his summon, even if we don't control another resonator with that race. Being able to count on a 800/600 at the cost of two will is a good reasong to try building a deck that's not only controlo, but being able to assault quickly our opponent. Thanks to the ramp up granted by cards like Elvish Priest and Gretel, it will not be hard to summon sooner than usual the Wiseman of Winds together with Fina, the Silver Player.

Before closing this article, we want to reveal to you the newest Magic Stone 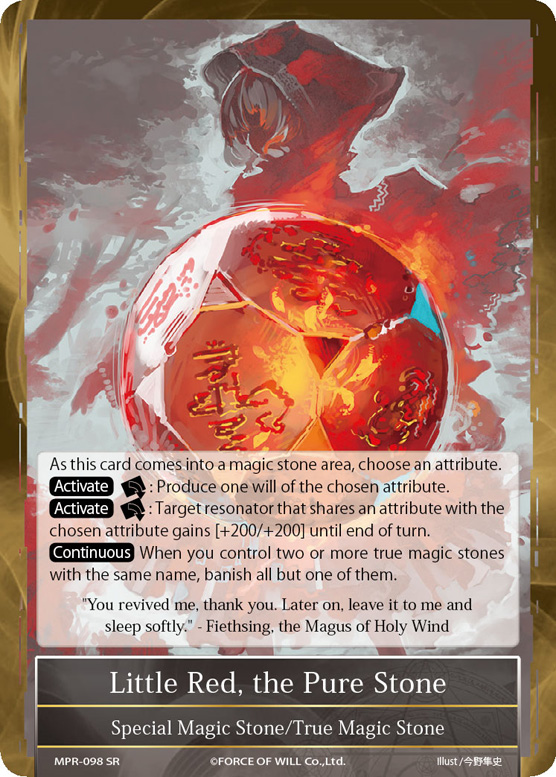 Little Red, the Pure Stone tells us the outcome of the battle between the True Fairy Tale and Little Dread, during which Little Red has channeled all her power into Feethsing causing its destruction and the consequent release of the Magus that was contained inside. Unfortunately this enourmous effort has transformed herself into a stone. The power of the True Magic Stone of Little Red allows us to make her became of an attribute of our choosing when it enters the Magic Stone area (no, it doesn't work with Gretel ). Alos we could decide to not produce will to gift a bonus of +200/+200 to a target resonator of the same attribute we choose before. An further way of using magic stones that will make playing strategies even more complex and interesting.

Even for this appointment with Fairy Unchained it's all.

Goodbye till next spoiler!