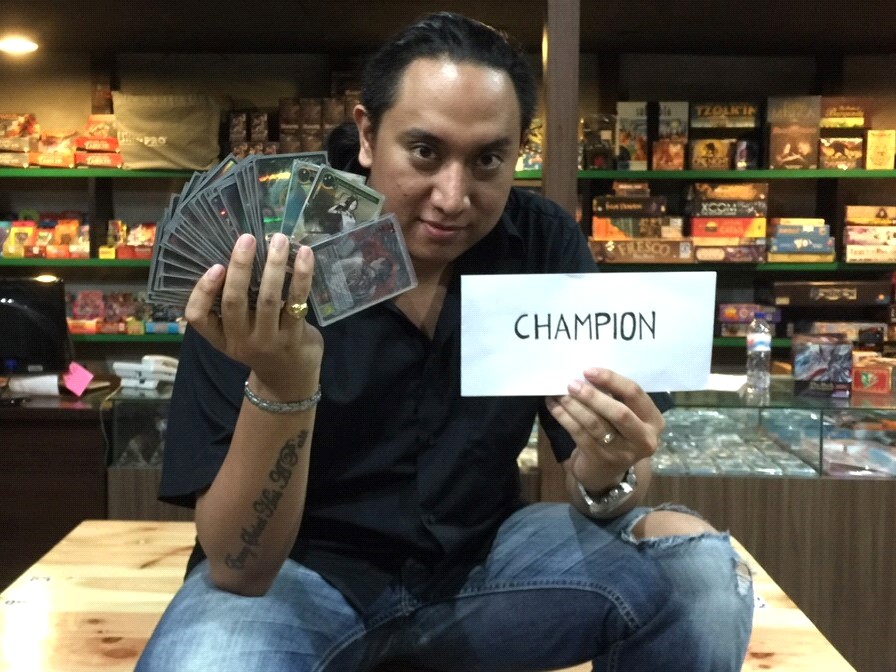 Before I start this, I just to personally thank Ipank for this opportunity.  It’s not often that players will open up for the community in such detail as I will be sharing with everyone today.  Throughout the entire interview, which I must say took some time due to our different time zones; Ipank was extremely easy to work with and as we spoke I quickly realized I was working with one of the most dedicated players I have ever met.  I can only hope that each person who reads this agrees with me when I say.....Ipank is a humble "Champion", with all the qualities and traits often uncommon in a person when they have achieved so much as he has.  So everyone I hope you enjoy this as much as I did...getting to know just who Ipank Aziz Riphat aka " Dark Grimm " really is.

Chibi:  So Ipank how long have you been playing Trading Card Games?

Chibi:  In the past 18 years how many trading card games have you been involved with?

Chibi:  Do you have any accomplishments in previous TCG's? What types of decks have brought you the most success over the years? 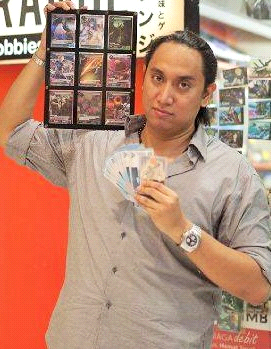 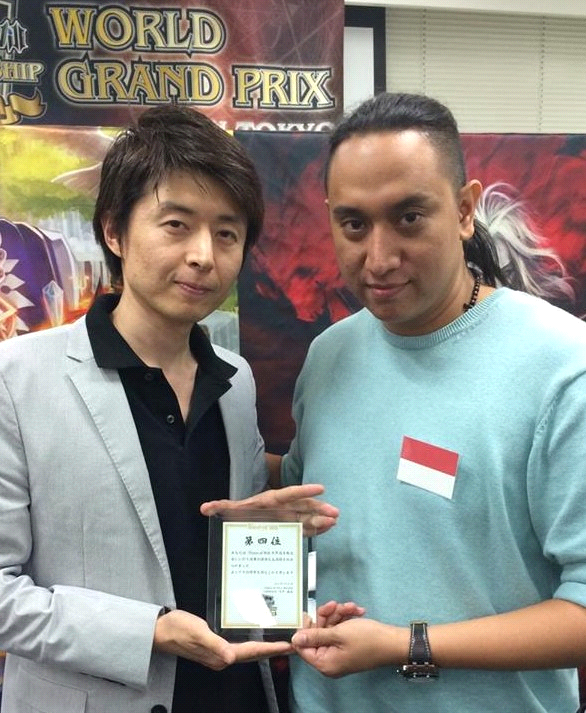 The above right photo is when I became " City Champ Jakarta " and to the right is when I competed in the Force of Will Worlds event.

In an all the TCG's I have played, I generally prefer very aggressive or a combo orientated decks.  These decks types I always seem to excel at and I have yet to see a reason to change what’s been working for me all these years.

Chibi: I know most players don't like to discuss their personal lives...but If you don’t mind me asking .....with the amount of success you have achieved in trading card games, how much of it is spent away from home? how much time did you dedicate to the game to becoming as good as you have become and achieving all the success?

Ipank:  When I was single....it consumed ALL of my free time! But now I am married and everything has changed. I can't speak for other players, but for me, every time I travel abroad to play in an event ; I always try to take my wife and children with me. Basically we can turn my competitions into so-called mini vacations for the family. During any downtime I have, which is usually at night, I think of decks and write down any and all ideas I have in a book (nothing fancy, just old school idea scribbling). From there I play it out as many possible scenarios in my mind ( my initial trial and error testing), before I actually attempt to put the deck together with actual cards.  So as you can see, I spend a lot of time around focused on Force of Will.

Chibi: What interested you about Force of Will and how long have you been playing?

Ipank: The gaming system in Force of Will is very interesting.  There are so many interesting combinations that be done. And of course....THE RULERS!!!!! I have been very active with Force of Will for 2 years now.

Chibi: What’s was the name of the event the event you topped or won? where/when was it and how many people attended?

Chibi: Prior to the event how did you prepare for the event and what was your expectations on what you types of decks you were going to face? How is you meta compared to other areas

Ipank:  I love making decks, so myself and " Team Ogre " made a few decks and play tested several ideas.  luckily ALL of the decks we tested and made secured a position in TOP 8!

As we had expected, there was a lot of Dracula, Abdul and Grimm decks on the  field. Just as we expected.

Chibi: What deck did you decide to enter with and why?

Ipank:  I decided to play a very fast Grimm build that could handle almost any situation.  While leaning towards a more burn heavy package.  And of course why not Grimm....It's ME on the card (laughing). 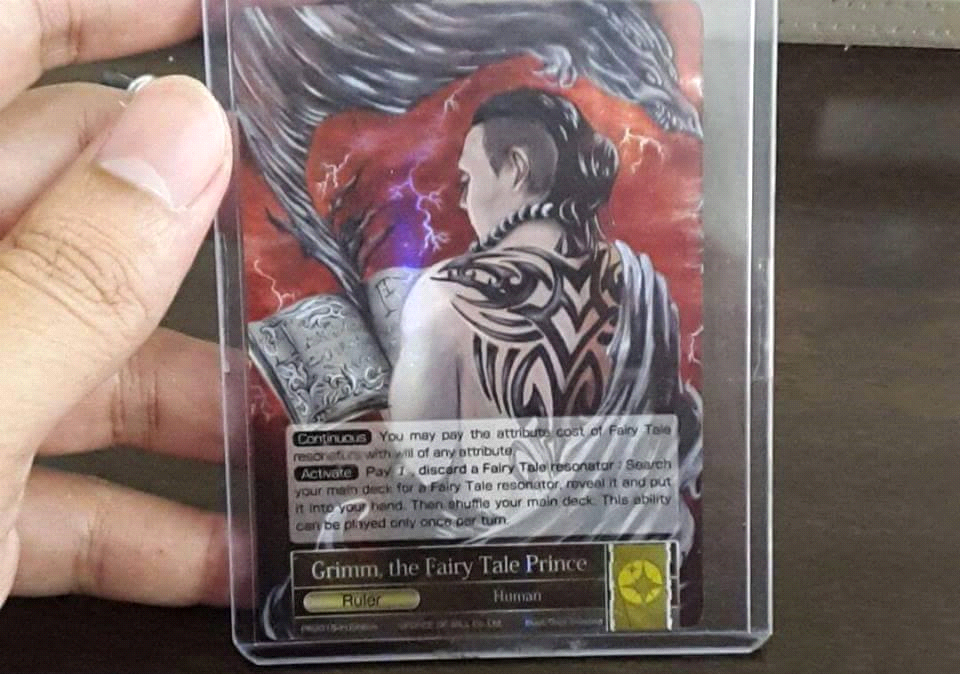 Chibi : If you don’t mind me asking. What inspired that design? 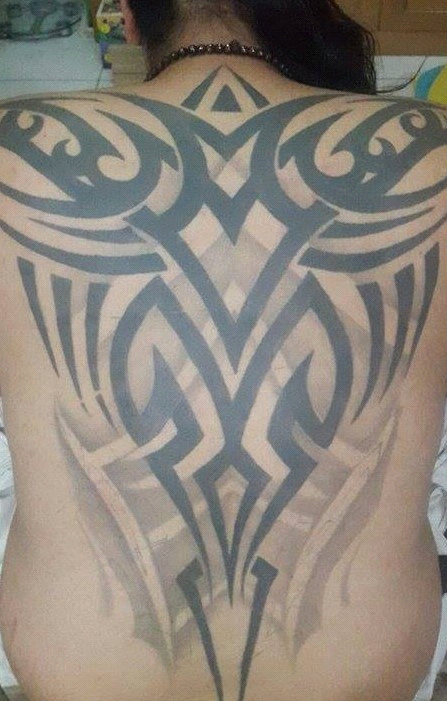 Chibi: Well Ipank I have to say it must really be an honor to have a card made after you, I mean Literally it is you!

Chibi: Any tips for other players on how to play the deck?

Ipank:  Just play fast!  Try to mulligan to get all the small resonators out first, and have at least 1 Glinda on the field to counter anything that could possibly harm your splitting heaven and earth play!  Keep in mind the weenies of the deck only go until turn 3,  after that it's time for the bigger resonators such as Oz and Hamelin to hit the field.  Also if needed( but rarely) Gilles will hit for 2,000 attack power, if he gets destroyed just reanimate him and attack again!

Chibi:  Would you like to clarify on any particular card choices for your main deck, stones and side deck?

4x hunter He is a 1 drop with swiftness, so either him or Tinkerbelll on 1st turn, he is also a fairy tale, so could be discarded later on

1 of the most important piece in the deck, she gives unblockable to the biggies...and counters !!! Super card...

600/600 that could search for Thunder is not an easy thing to handle, it also doesn’t die to (Bahamut addition, forgot the name)

Im sure u guys know what this guy does...lol...

The most powerful resonator finisher in the deck...At first I wanted to use 4 Hamelins, then I figured why not a flier with at least 2k att(6 fire stones) that cant die, in some occasions u want him to die so u could banish 3 heat ray stones, so that your next turn splitting won’t hurt u as much

It can search for any card you NEED !!!

Or search for Hamelin to open the way...

The deck only needs 1 light stone on turn 3, if you use 4, its 40% at the start and keeps rising...also the chance to get 2 or 3 is very big, you don’t want that because your using split heaven and earth.

And safer for your split heaven and earth

1x emperor with no clothes

Helps a lot against musketeer decks or (+800/+800 if life lower than opp, also forgot the name), or true little red

On long games Necronomicon is trouble

Also it flicks Gilles...or ur opp Hamelin at the beginning of ur recovery phase

The best sideboard so far...

Its like viagra ( hahahha ) to your deck againts the vamps...

The super OP card, imo this card is too powerful not to use, u can kill any j ruler with this...

Just att the ruler with ur resonator, then BOOM !!! bye jruler, thank you, come again...hahaha 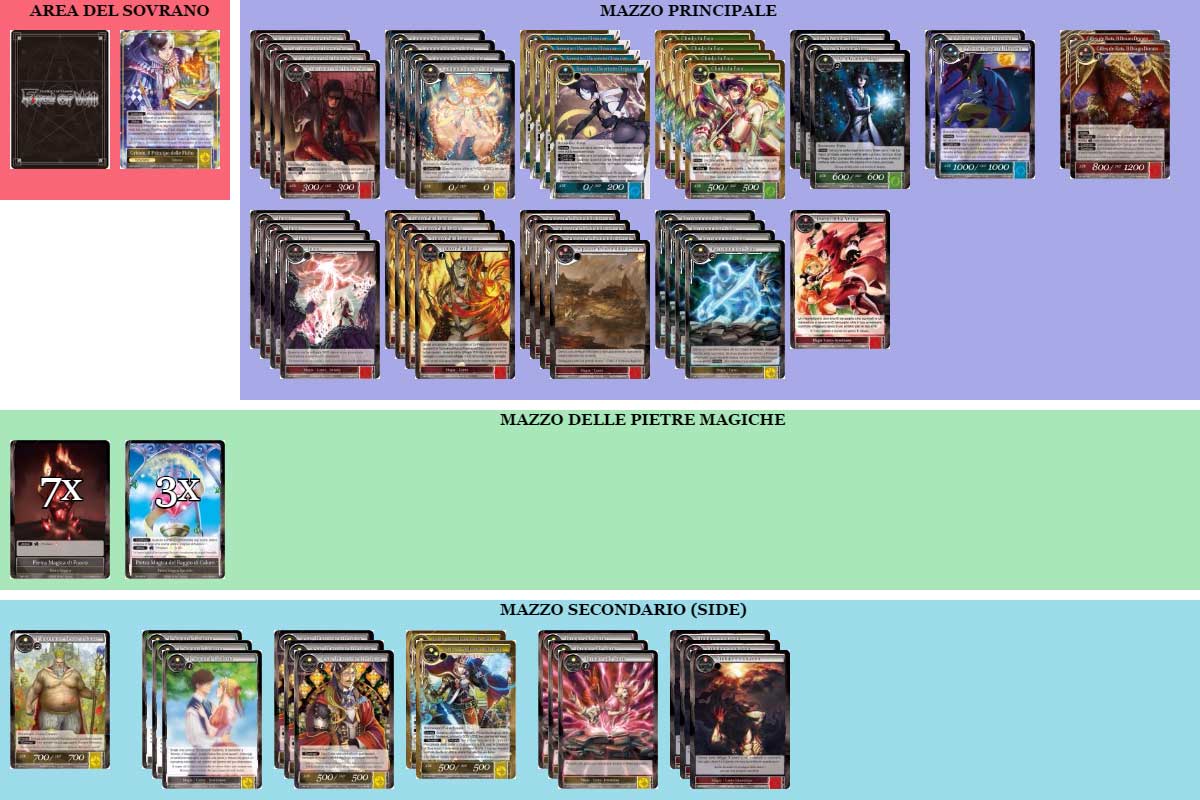 Chibi: What were your matches throughout the event?

The deck build was also one of my creations but it was tweaked a bit. Unfortunately I knew how to play around the build.

Didn’t remember much about this match, But I do recall he sided into Dracula.  But in the end I just burned him out.

second game he flipped at turn 3 or 4;  I just used  duel of truth him with Hamelin

This deck was quit surprising the opponent suddenly added 2 addition(+800/+800 if ur life is lower) and attacked luckily I had a Cheshire to block and burn him out.

BATTLE of the burn decks. Not too much to say here.

More or less...I just Split Heaven and Earth'd him to death =) .

This time he added the addition to the double strike werewolf, but again I had a Cheshire to block, and pinned him with a Hamelin.

Top 4 vs Scheherazade round 1 opp

I rushed from the start, discarding and searching for lots of Tinkerbell's and Glinda's

Also not much to say - splitted him to death game 1

Game 2 I had a Gilles in hand, the opponent returned it to my hand last turn, could have attacked with it for lethal, he had a blazer in play and 1 red blue stone opened, I attacked with Hamelin and he returned it with dream. In response  I used Tell a Fairy Tale to  search second Hamelin, to tap the blazer again.  He drew for his turn and conceded knowing I have a Gilles in hand and Hamelin in play.

Chibi: Reflecting back on the event - was there any choices that you thought you should've made but didn't? ã€€

Ipank:  I would change duel of truth with crime n punishment in the main deck and change 1 Grimm resonator in the side for 1 copy of Savior of Splendor.

Chibi: I recall you mentioning Team Ogre. How many players in the team and what store do you guys play out of? 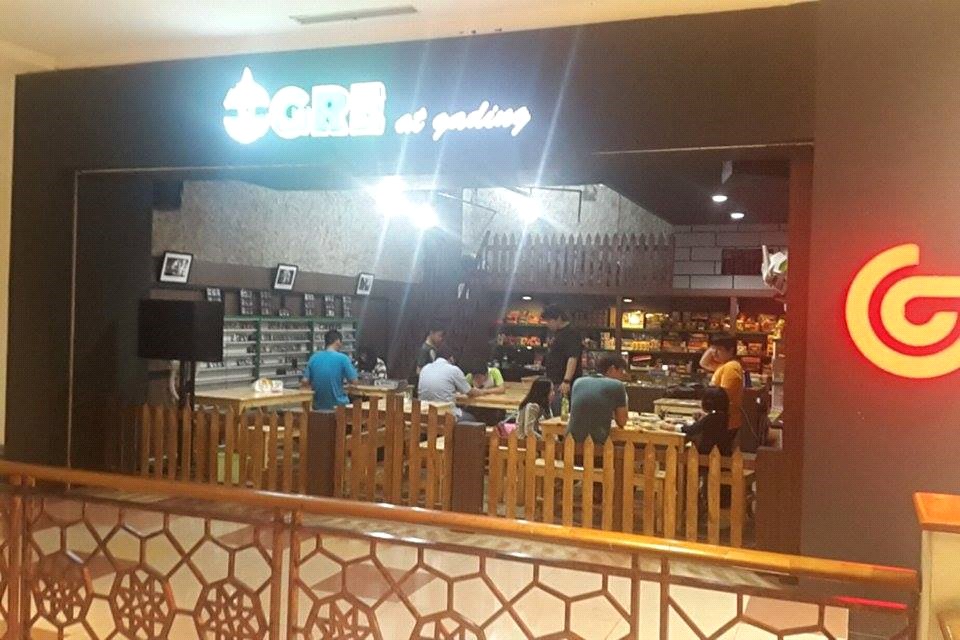 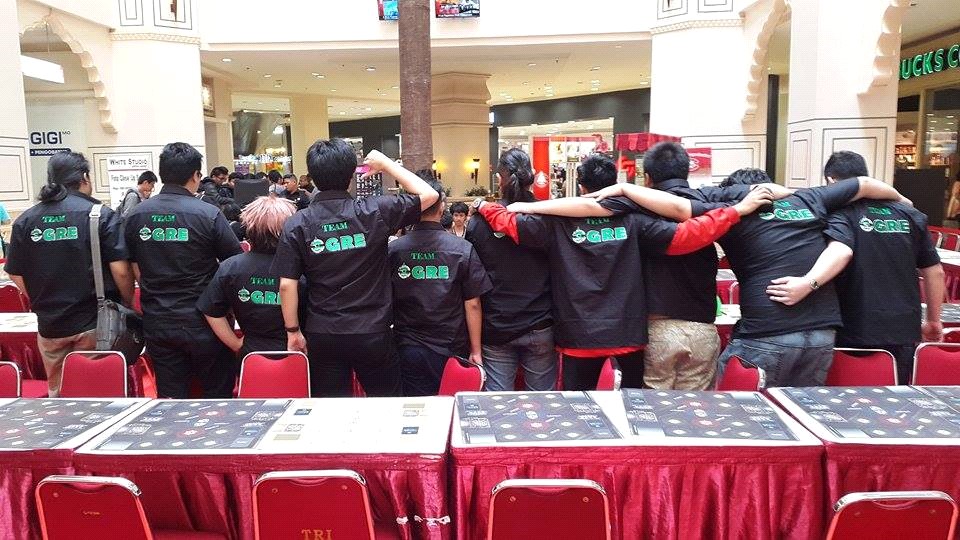 And here is where all happens.

Chibi: Throughout all the force of will events you have been to, what is one of your most memorable moments?

Ipank: All the moments I have experienced playing Force of Will have been memorable (smiling). But if I had to choose one, well.... maybe during worlds against Daniel " Bakaneko " Spano.  This guy is like a brother to me, but in our match he had my life down to 200 and I was able to make a comeback and swing for game when he was at 3800 life still. 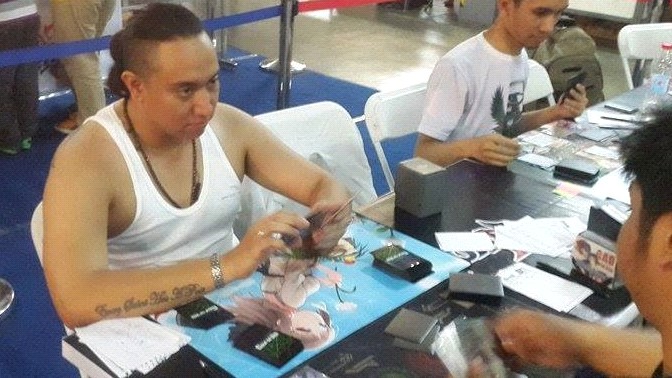 Also while competing for " City Champ of Bandung " the air conditioner went out.  It made the event very unfordable but I just took off my shirt and continued on with the event and..... I WON!

Chibi: NOW that what I call dedication and focus!!!

Chibi: What do you expect or hope will happen in the future with FOW?

Ipank:  I hope Force of Will grows bigger and that’s the rulings don’t change all too much hahahahahaha.  Also please don’t "mass" reprint cards, because it ruins the secondary market, unless it’s an alternate card or full art...hehe... (just my request =) )

Chibi:I know you’re going to japan this coming September, can everyone expect you to be playing Grimm? Force of will be releasing Millennia and Vingolf later in July. With the current spoilers that you have seen, has anything caught your eye that you may try in Grimm?

Ipank: You could say there has been a few things that have caught my eye. Unless...something revolutionary comes up in my head or with my team that will shake up the event!

Chibi: Any other events prior to the Japan Grand Prix?

Ipank: Yes, I will be attending the Singapore open is next month!

Chibi: Be sure to let me know how that goes...we're friends right! hahahahahah

Chibi: Comparing the current Metas in Japan, Italy, and Australia - how much different is Indonesia's Meta?

Ipank:  I always express to my fellow Indonesian players to try out their ideas and to never be afraid  to try any and all their ideas in the tournaments.  I would think with in mind that our Meta is very different that the other countries.  WE constantly experiment A LOT.

Chibi: Do you have any parting comments you would like to add? Any tips for current and new players? 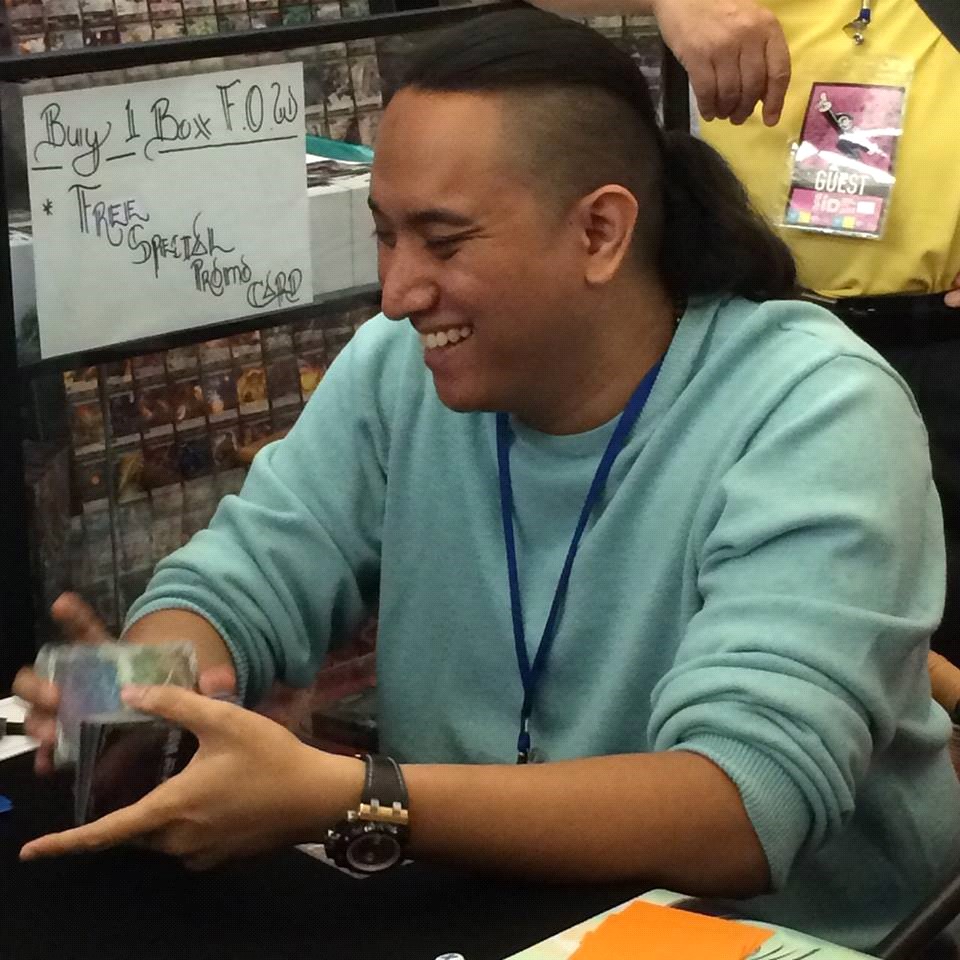 Ipank: Try not to net deck! Building decks are fun, try out your ideas and try not to rely on someone else's! You will never know what works until you have tried it out. But most importantly...HAVE FUN EVERYONE!!!

Chibi: I just wanted to thank you for taking the time to do this article/interview Ipank! It has been an interesting few days for the both of us. I definitely look forward to speaking with you again on your coming event in Singapore. Until then, it’s obvious. May the “Force” be with you!!