Here we are! You have been waiting for her for a long time. You dreamed her for 1001 nights, trying to imagine how she would have changed the Force of Will metagame, and finally you can admire her in all her magnificence: ladies and gentlemen, we introduce you the real protagonist of the entire Grimm cluster 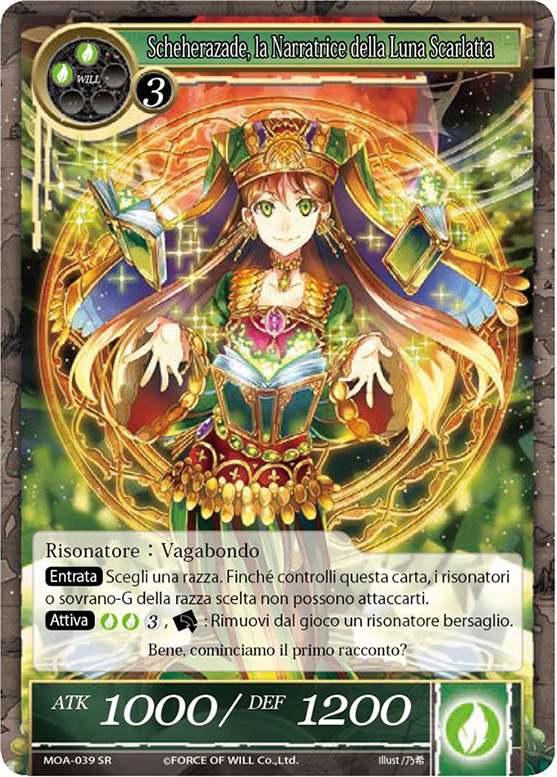 It’s hard to decide how to begin when you analyze a card like Scheherazade, the Teller of the Crimson Moon. Let’s start with the cost: five will – three wind – is high. But reading the abilities, we understand why. In Enter, we choose a race and as long as Scherry is under our control, every j/resonator of that race can’t attack us. Once we have identified the main threat, thanks to this card we put a strong barrier between our life points and the opposing finisher. If we choose “Demon”, the opposing Mephistopheles won't kill us, or if we choose “Dragon” we can stop Gilles, Blazer, Yamata and even Bahamut. As we easily understand, Scheherazade is the kryptonite of the theme decks like Grimm-Fairy Tale, Elves or Vampires. Even if this ability doesn't thrill you enough, our wanderer has another effect that allow us to remove target resonator from the game by paying two wind will and resting her. Thanks to this, if our opponent has an ace in the hole, and it hasn’t the same race we choose before, we can stop it whit only two will.

Obviously, doing this we will expose our Teller to the enemy attackers, but thanks to her high ATK/DEF she will not easily surrender. At this point, the main threats comes from cards like Stoning to Death, Carmilla or Flame of Outer World and even Abdul could be a problem. But she is a Wind attribute resonator and we can count on all the counters of the game: Absolute Cake Zone, Xeex, Exceed and the True Magic Stone Feethsing. Moreover, thanks to Elvish Priest, Gretel and Fiethsing, we can easily play her in the third turn, instead of the fifth, and reduce the chances of our opponent to draw an answer in time.

A power like this makes this new Scheherazade a main target for all the removals that our opponent has. For this reason, she must be defended. Besides the previous cards, “Millennia of Ages” give us another interesting “protection”, especially for Kaguya and her Treasury Item.

At the cost of only one wind will we can assign this Addition to one of our resonators to give it the opportunity to come back from the graveyard. Unfortunately Enter abilities doesn’t trigger again, but talking about Scheherazade we can have in any case a 1000/1200 that at the cost of two will removes a resonator from the game. Leaves of Yggdrasil is a useful card, that forces our opponent to face twice our threats. Of course Kaguya is the one who gains more power from it, but we can imagine that this card can find a place even in other decks. 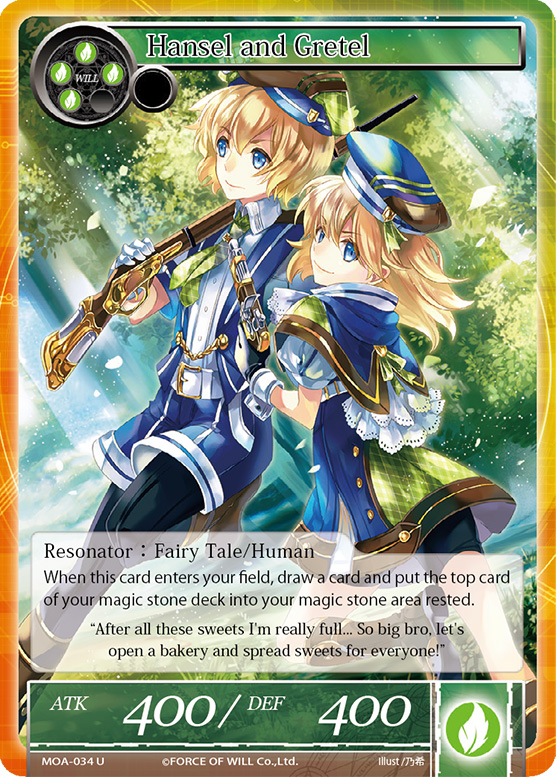 The cost is high, because it needs four wind will. But we have to think about the context of this attribute: wind has no difficult to produce great amount of will early in the game. ATK and DEF are not very balanced considering the cost, but this is a type of card that performs its function the moment it appears on the field. The ability is not an Enter, so it triggers even if the resonator comes back from the graveyard thanks to the Leaves. Being a Fairy Tale, it could become a new entry in the Grimm decks, that have recently abandoned Gretel in favour of a Magic Stone Deck more oriented to the Fire attribute. Thanks to the brothers, the Prince of Fairy Tales gains another way to draw cards (in addition to Cheshire Cat) and a stones accelerator (even if the stone is placed rested). We will see how much this card will be played.

Now we go back in time to visit a place that we know well: Refarth, the Wind Castle. 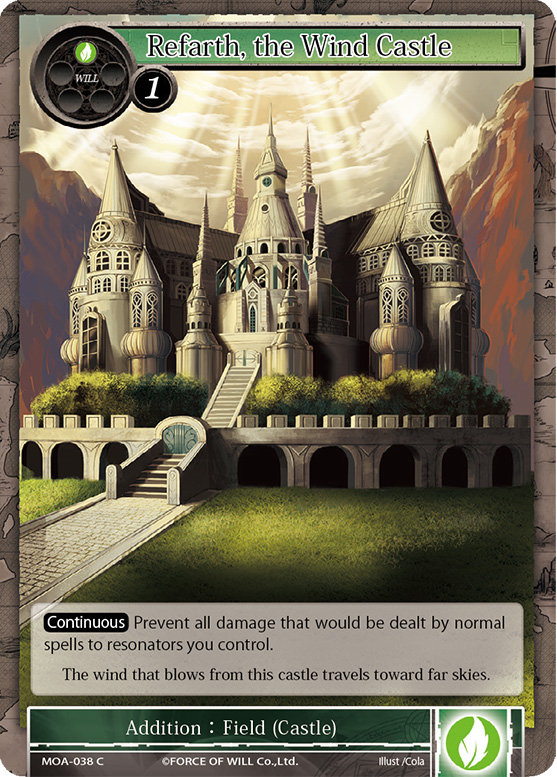 As you remember, the abode of the true Little Red was spared from the devastation of the first war against cthulhu because it flew away in the sky thanks to the power of Fiethsing. In this age, we still find it on the ground and its ability allows it to be recognized as the ultimate solution against the Flame of Outer World. As long as it remains on our side, all damage that would be dealt by normal spell to our resonators is prevented. No more thunders or flames coming from the opponent hand will kill our resonators. We are sure that from now on this Addition: Field will appear very often into the lists and at the same time, the decks that want burn the field must carry cards against additions to maintain their strength.

We finally arrived at the end of this spoiler of the Wind attribute and we close with the last card that has to be revealed: Liberate the World. 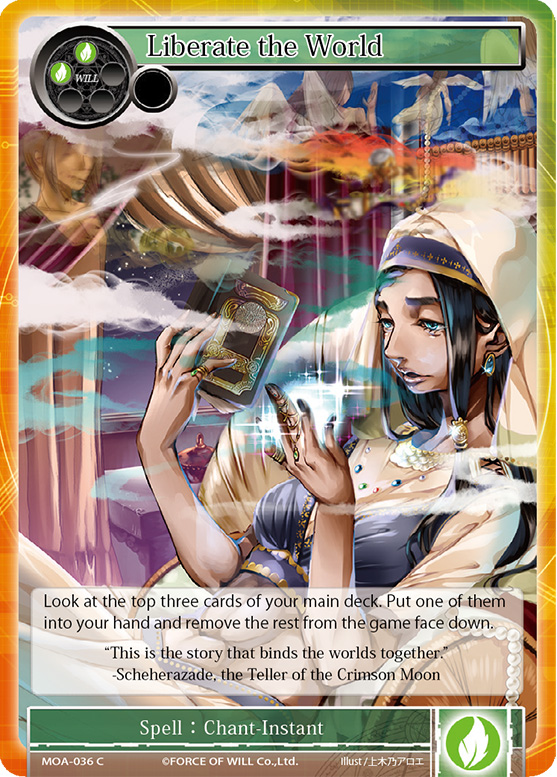 This spell Chant-Instant costs two wind will and allows us to look at the first three cards of our main deck, put one of them into the hand and remove the other two from the game, face down. The first thing that comes into our mind is to discard Blazer, the Eater of Dimensions and play him as soon as possible, when our opponent doesn't expect it. But the J-ruler that fits in better with this card is Lumia, thanks to her ability to play every cards removed from the game, so it doesn't matter what we choose to discard, we'll be always able to play it. Liberate the World is an interesting card, that could be included in some wind decks, that at the moment have only the Familiar of Holy Wind as draw engine, or Cheshire Cat if they have Water as a secondary attribute. We will see.

And even for the Wind it’s all folks! In this second article we have revealed a card that probably will become protagonist in the next metagame: Scheherazade, the Teller of the Crimson Moon. If you agree, start to think about the best way to use her or to destroy her. Whatever your side, from now on you’ll have always to consider this card when building decks.

Thank you very much and see you next time!