We're getting closer to the end of our journey through time and today we'll know earth's enemies, starting with the new form of the devourer of dimensions and sworn enemy of our Alice 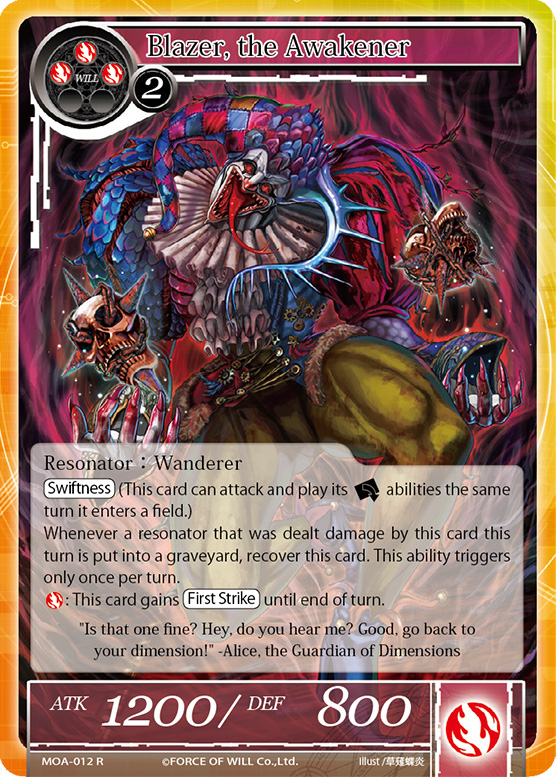 Blazer left the role of a Dragon to became a Guardian with the creepy look of a clown. What's not changed its his cost ( five Wills of which three Fire) and his inclinationg for aggressiveness. Also the Awakener has Swiftness and an important Atk value. He loses some solidity on DEF over his previous version, since with only 800 he exposes himself to the damage of Flame of the Outer World. The fact remains that his ability to recover on the turn a resonator he damaged has gone to the graveyard is really interesting and coupled with Swiftness it can easily be a finisher.

Let's think how many times our “panzers” crashed against a Cheshire, making us lose a turn. It will be no more like that with Blazer, because even after he's been blocked, it will ready himself and deal another 1200 damage. At the cost of only one Fire Will, also, we can make him gain First Strike, and this makes it easier to activate the previous ability because he will survive at the most part of the resonators that want to block him.

Among the creatures that threatened the survival of the world in the past we find again Cthugha, the Living Flame 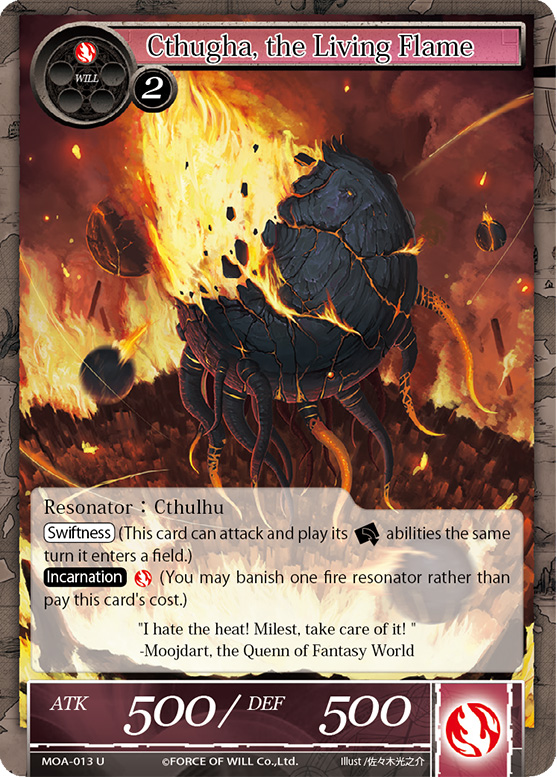 At a first look the cost of three wills is too high for a 500/500, even if he has the simbol skill Swiftness. But if we consider his Incarnation with only a single Fire resonator, we soon realize that this chtulhu can be a good weapon for all those decks that relay on high aggressiveness. The play that immediately comes to mind is to mulligan to find a couple of them, having on had one Hunter in the Black Forest or Black Goat. If we're starting, even before our opponent can call his first magic stone, we can do : Hunter – attack, incarnate Cthugha – attack, incarnate Cthugha – attack. They are 1300 damage without a chance for our opponent to do anything, that immediately are forcing the game on a really defined rail. The problem is that we're  emptying our hand so we'll have to be good ( or lucky ) to manage the following turns to not losing the advantage we gained.

Emissary of Another Dimension is a 400/400 resonator at the cost of three Wills ( two Fire) that when he appears on the field he allows us to recover a target resonator. Pretty good ability that can make us forgot the bad ratio between his cost and his stats, because basically it allows our finisher to make a second attack, or it can make us use again an ability that requires to rest a resonator. As for his second ability, we can banish him to destroy a chant-standby on the field. Really useful for avoiding unwanted surprises like Sign to the Future, for example, or for seding a Yog-Sothoth or a Yamata to the graveyard, after having set them, without having to discard them from hand.

After the resonators, we're going to see the spells. 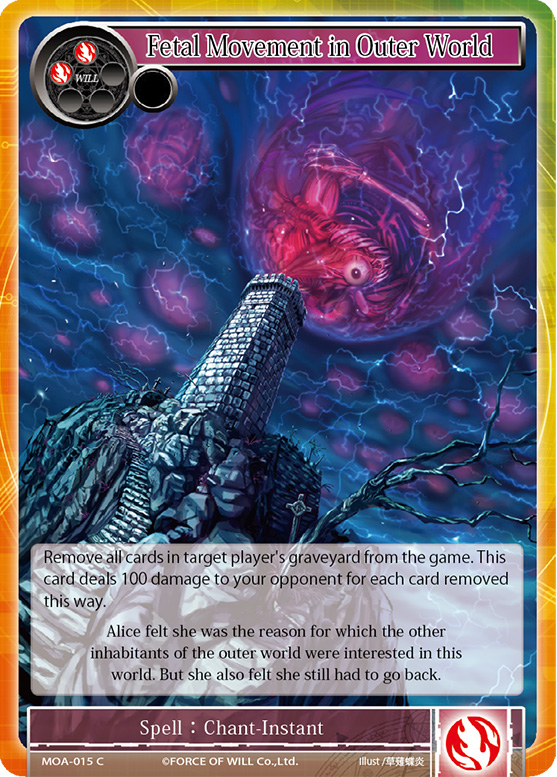 Fetal Movement is an instant that at the cost of two Fire Wills will allow us to remove from the game all the cards in the graveyard of a player. Really useful against decks that use Necronomicon or that are based on the graveyard like Chtulhus' or Genesis Creation decks. Also, for every removed card, we'll deal 100 damage to our opponent, it doesn't matter who the removed graveyard belongs to. A really interesting card that can give new life to Lumia's decks, because if Fetal Movement is used on chase of Xeex it could really make the difference. In the end, we're not excluding seeing more than one copy on the side of the decks that uses Fire as an attribute.

The last card for today is an Addition: Field 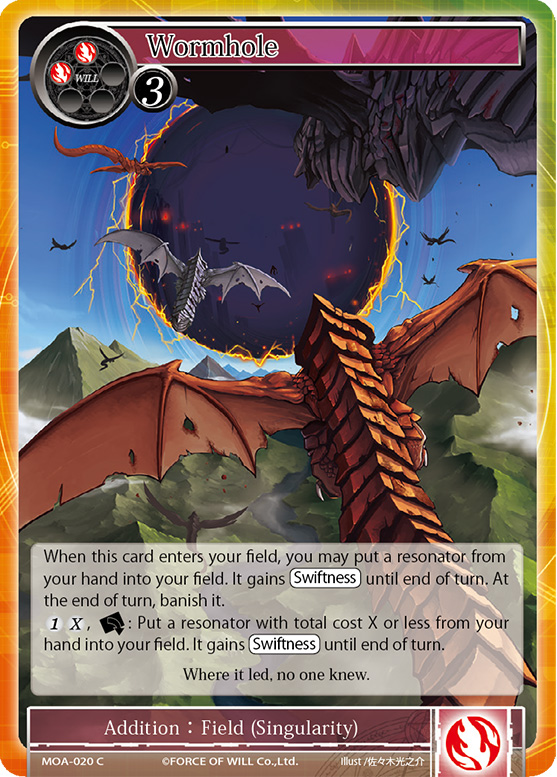 Wormhole costs 5 Wills, but it has a really decisive effect on the match: when it appears on the field we can put on the filed, from our hand, a resonator and grant him Swiftness. Thanks to Genesis Creation we can do it as soon as turn 3 and – not being an Enter effect – we can deploy two resonators, one from the hand and one from the graveyard thanks to its effect. Milling and discarding could result in a winning strategy for some decks. At the end of the turn we're force to banish the resonator, but if we have played if well, it could be too late for our opponent. To justify its high cost we look at this second effect: paying a generic Will plus other X generic Wills and exhausting it, we can put on the field from our hand a resonator with cost of X, and grant him swiftness. This time it will not even be banished. You can understand that with any 5 Wills we can put on field a Swift Mephisto that cannot be countered by Xeex or Excedd because we're playing him thanks to the addition effect. A card that must be surely looked at for the next meta, it will force a lot decks to bring cards to destroy additions, at least on side.

With this episode we've come to an end for the Fire Spoilers. In the end we think all the cards are good and some are also really strong. We're expecting to seem them a lot on decks on the top of many tournaments, and not only locals.