Rise of the Ruler: The Unstoppable Celestial Army.

Hi  everyone and welcome back to a new and crackling episode of Rise of the Ruler.

Today's protagonist is one of the Kings that we'll meet during Alice's journey through the Seven Lands. 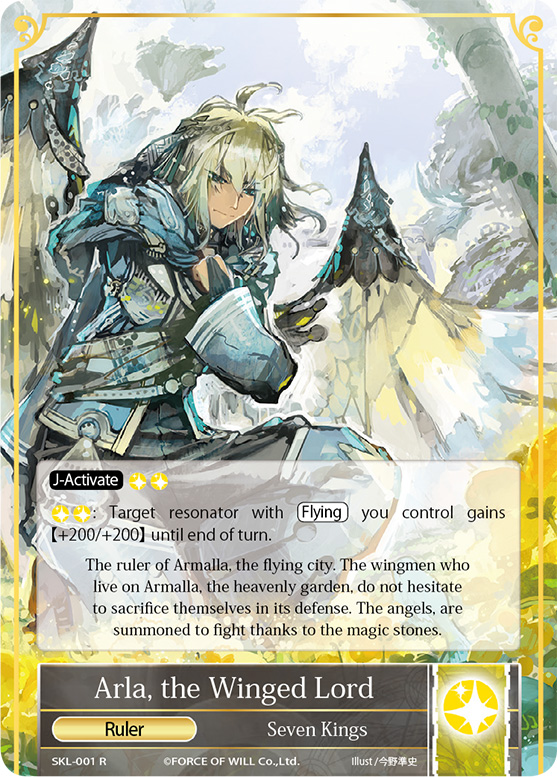 Arla, the Winged Lord is the ruler of Armalla, the flying city. His ability can grant a bonus of +200/+200 to a target resonator with Flying at the cost of two Light Wills. It's not very cheap, but it could become useful if we have two stones ready that we haven't used yet and we don't want to waste them. A lot more interesting is his J-Activate, because it also costs only two Light Wills and it lets us to call on the field: 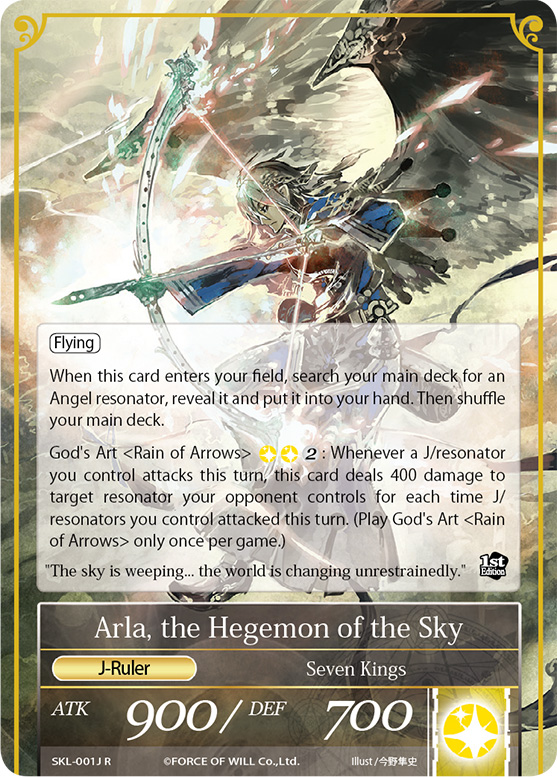 Arla, the Hegemon of the Sky is a J-Ruler with nice ATK/DEF values and with the Flying symbol skill. As soon as he appears on the field he allows us to search an Angel resonator from the deck and add it to our hand. A nice ability because it gives us an additional card of our choice, increasing the number of arrows for our bow.

We're not talking about arrows without a reason, because this King has also a God's Art, that's conveniently called “Rain of Arrows”: with four Wills, of which two must be Light, anytime one of our resonators or J-Ruler attacks, Arla inflicts 400 damage to a resonator controlled by our opponent, multiplied by the number of times the resonator or J-Ruler have attacked during that turn. Let's make an example: on my field i have three resonators that are ready to attack. I activate “Rain of Arrows”. On the first attack Arla will inflict 400 damage to an the opponent's resonator. When I attack a second time, Arla will inflict 800 ( 400+400 ) because I did two attacks during this turn. At the third attack, Arla will inflict 1200 damage ( 400 for three times) to a target resonator. You can understand that thanks to Flying, characteristic of the new Angel race, we'll be able to inflict damage to our opponent and at the same time clear the board.

The only thing we need to pay attention to is the presence of Flame of the Outer World on the New Frontier format, but about that we can always use the useful Excalibur, that exhausted before the Judgement can make Arla a 900 DEF, this way he'll be able to withstand this annoying spell.

Every King, as we learned, is accompanied by his Regalia. Arla's one is Artemis, the God's Bow 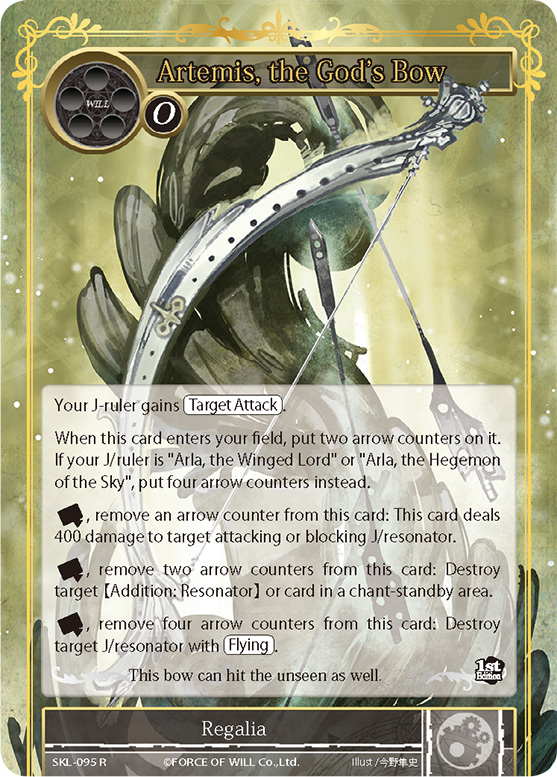 Like all Regalias it costs zero Will. His first effect is to add Target Attack to our J-Ruler. On Arla, that already has Flying, it is a nice addition. When Artemis enters the fields it gains some arrow counters: four if we control one of two Arla's forms, two otherwise.

Based on how many counters we want to remove, we can activate one of the effects that requires to exhaust it. With 1 counter we can deal 400 damage to an attacking or blocking resonator or J-Ruler. With 2 we can destroy an Addition: Resonator or a card in a standby area. If we remove 4 counters, we can destroy a resonator or a J-Ruler with Flying. Having J-Rulers included makes this incredibly powerful, because if it's true that Dracula and Bahamut have Imperishable, thanks to the Almerius' Magic Stone we can destroy any other J-Ruler. Not counting that we can get rid of threats like Mephisto and Gilles.

Like we said Arla is the lord of the winged ones, like the Angels. The first one we encounter is a splendid Celestial Wing Seraph. 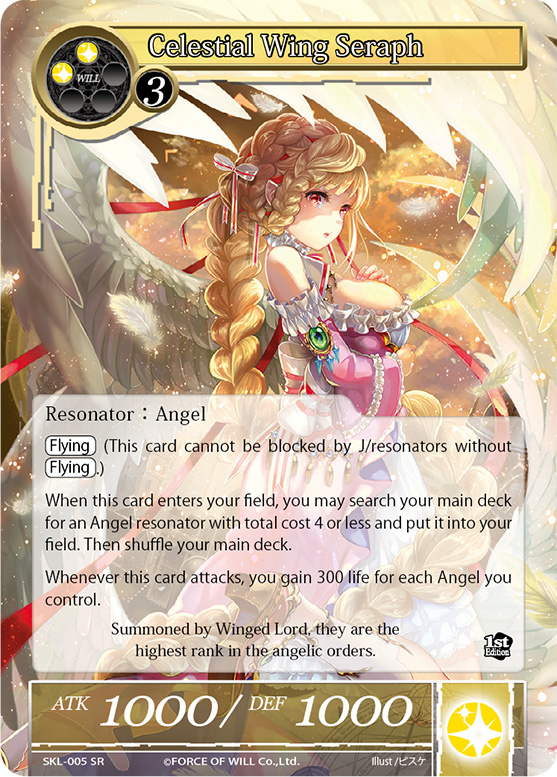 At the cost of five Wills, of which two must be Light, we can summon a 1000/1000 with Flying that gifts us another Angel directly from our deck with a cost of four or less. A really good ability to create board and maybe for recovering from a situation of disadvantage, or maybe for doing the last mile towards victory if we're already ahead. Another thing that makes this card a lot more interesting is the fact that when it attacks, it raises our life points by 300 for every angel we control (this means that only by summoning her they'd potentially be 600).

Talking with New Frontiers in mind, we know wind counters are always around the corner. Anyway the good thing is that the effect of this Angel is not an Enter, and that makes it interesting looking at cards like Genesis Creation or Pandora's Box, to stay within the Light attribute.

Let's move on with our Angel showcase at Arla's side, here we have Dignified Seraph. 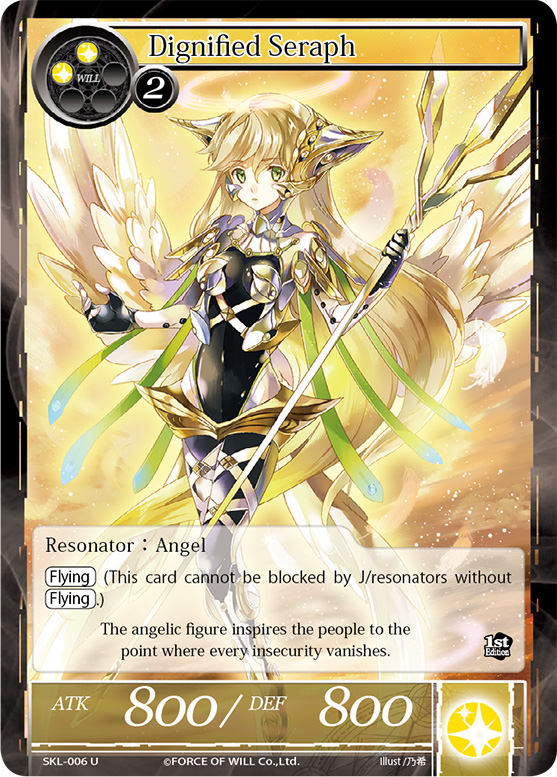 The efficiency of this card is all in his cost. With four Wills it is a nice call for Celestial Wing Seraph, and this means that at cost of five wills we have on the board 1800 Flying damage and we gain +600 life points. Obviously, this will occur during the following turn. This is a spiny situation with which our opponent will have to deal quickly before being overwhelmed real fast.

A Less efficient choice for the Seraph ability is this Little Angel of Armalla. 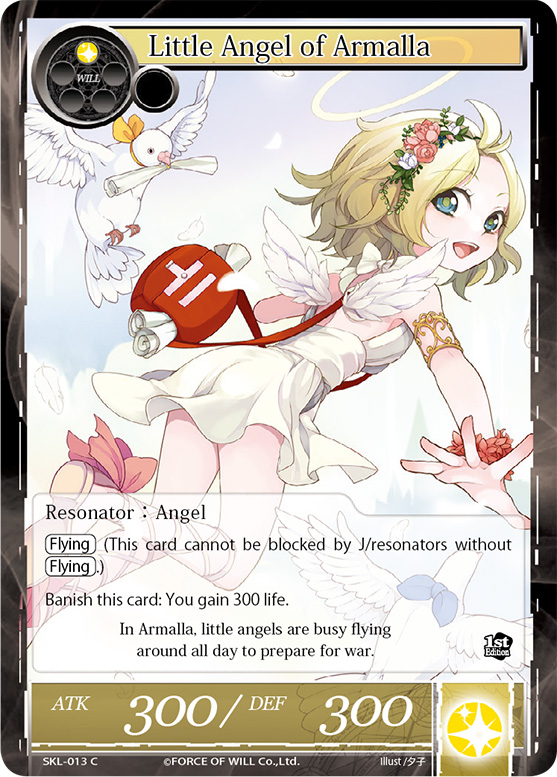 A resonator that we definitely want to see on the first turns, since he only costs a Light Will, has Flying and if our opponent decides to deal with it, we can banish him to gain 300 life points, that's  never a bad trade.

Not only Angels lives on the kingdom of Armalla, there are also the Wingmans. The first one we meet is the lovely Herald of Winged Lord. 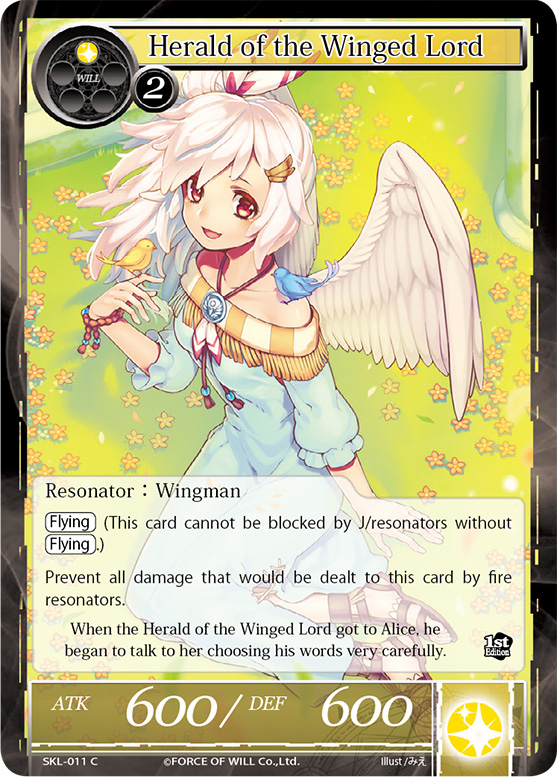 A resonator with good values if compared to her cost of three Wills, that has a certainly important ability: she can resist to threats such as Gilles, Blazer and Susanowo. That's because she can prevent all the damage that fire resonators may deal to her. A card that could be often found within sidedecks of Light attribute's decks.

Let's take a look now at the kingdom were Arla rules, the Heavenly Garden of Armalla. 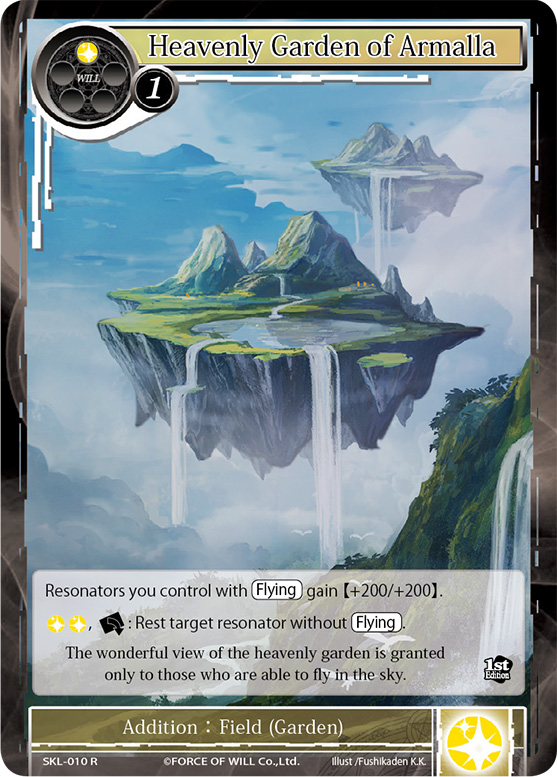 An Addition:Field that costs only two Wills and gives a bonus of +200/+200 to all our resonators with Flying. A really good support to our aerial troops and even more interesting thanks to the second effect that allows us to stop an opponent's resonator without flying paying two Light Wills and exhausting it.

At last let's take a look at which spells we can enrich our deck and make our strategy more complete. Let's start from Invigoration of Winged Lord. 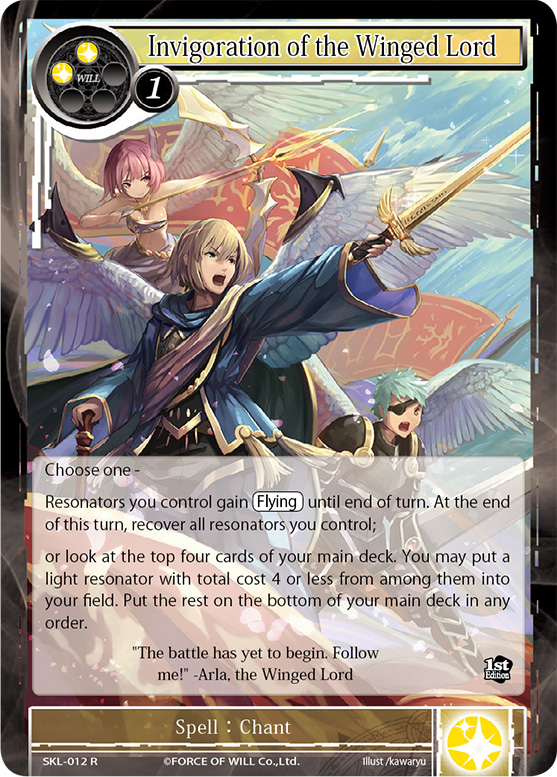 A Spell: Chant that at the cost of three Wills lets us choose among two options: grant Flying to all our resonators and recover them at the end of the turn, or looking at the first four cards of our deck and put on our field a Light resonator with cost 4 or less. For example, based on the situation, we could decide to use the board we already have with a mass attack without exposing ourselves to a probable counterattack, or adding a piece to our board without the risk of having it countered by a Xeex,. Probably we'll often choose the first option, anyway we could decide to put a resonator on our field through an indirect way after using the Cheshire effect to be sure of what we want to reveal.

The last card we're going to reveal during this big spoiler of the Light is Give Wings. 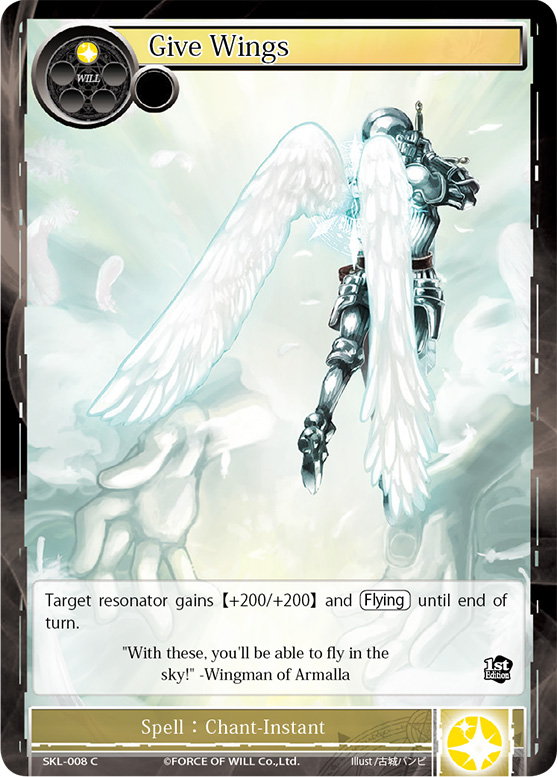 With only a single Light Will and at instant speed, we can increase  up to 200 points the stats of one of our resonators and at the same time give it Flying. This is really good for a direct attack to our opponent's Life Points by routing his defenses, it is also quite good for blocking one of his flying dudes and spare us a lots of damage.

This episode as well has come to an end. We've seen a lot of interesting cards with which we'll probably have to deal with in the following months, certainly because the Light Gained one of the best abilities in the game: Flying, which could became a key attribute of the Alice Cluster.