Rise of The Ruler: Welcome to Niflheim, the Dark Kingdom of Death

Welcome back to a new episode of Rise of The Ruler! At this point of the publishing we can't tell how many preview cards have arrived from our Japanese friends so, first of all, we need to start talking about “Stealth”, one of the newest keywords introduced in this set, since the dark attribute which we're about to introduce today uses it a lot.

“STEALTH” is a keyword that's specifically for Resonators and it comes to complete the rewrite of the ruling about the Standby Area that was done earlier this year: if a resonator put in this area could be used only to bluff before, now they have been made playable and have a practical use !

The Resonators with the “STEALTH” keyword could be played without paying their cost, so basically “STEALTH” is comparable to “TRIGGER” of the chant-standby cards only applicable to Resonators.

Here’s unveiled the mystery about the return of the Lifebreak Area that floated around the game since the Venetian tournament: now from our StandbyArea we can play both Spells and Resonators like they were the old Valhalla cards, but without the extreme unpredictability of the dynamic of the Lifebreak Area, now everything is in the hands of the player who will be the maker of his destiny.

After this brief introduction let’s venture forth into Niflheim, the Kingdom of Death! 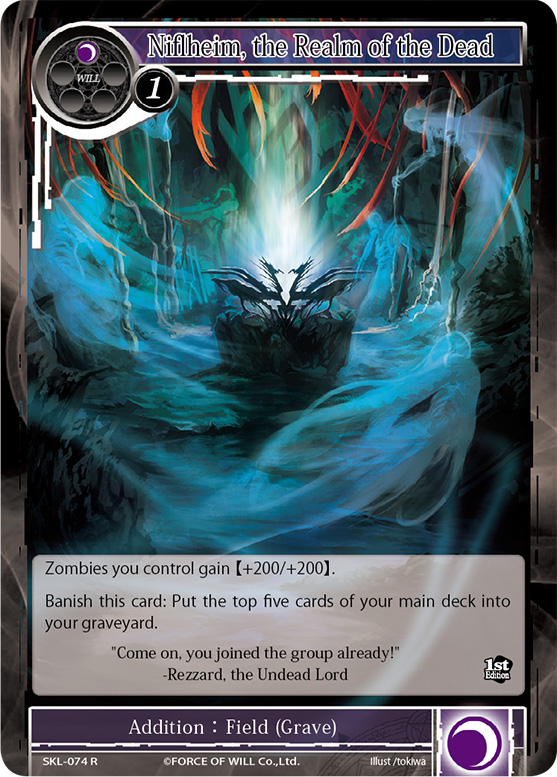 This cards doesn’t need much explanation: it’s a racial buff similar to many others we’ve seen, both in the cost and in the amount of the buff given to our Zombies. What is peculiar about this card is its second ability: by banishing this card we could send the first five cards of our deck to our graveyard. Perfect under a “lore” point of view since the Kingdom of Death needs a lot of subjects to flourish, it has a lot of synergies with other types of decks like the Cthulhus or the “Reanimators” in general.

But what would be a Kingdom without his King?! It’s about time we get to know Rezzard, the Undead Lord 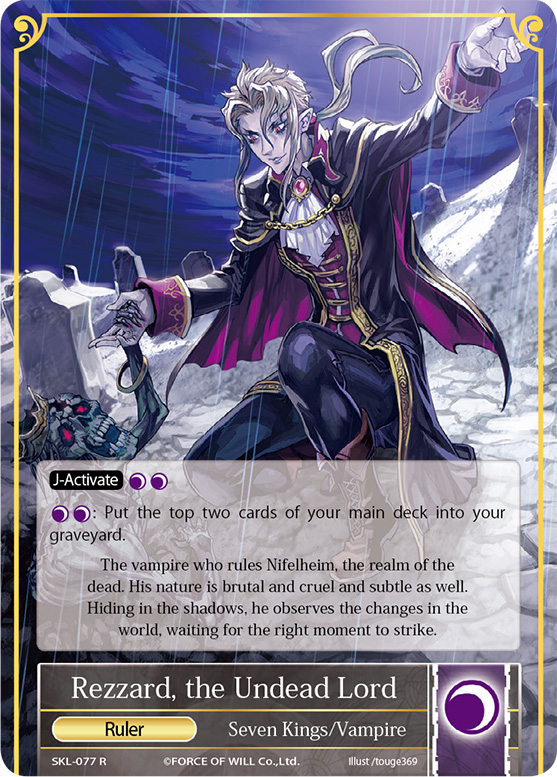 Rezzard is one of the Seven Kings that gives the name to this set but it’s also a Vampire, and that makes for a lot of interesting synergies with lots of cards from the Grimm Cluster.

Both his J-Activate and his second ability can be activated paying two Darkness Wills, ability that allows us to put cards from our deck into our graveyard. We can see now that the path is clear: this Ruler makes the graveyard his main font of power meaning that cards like the Book of Eibon or Necronomicon could be really good to add when you're assembling your Rezzard Deck. Obviously the worst enemy of every strategy heavily based on the graveyard, up to today has a precise name: Xeex, so look out from this threat, for your vampires he's even more fearsome than the sun!

Upon using our J-Activate wel get to know Rezzard, the Desecrating Vampire!! 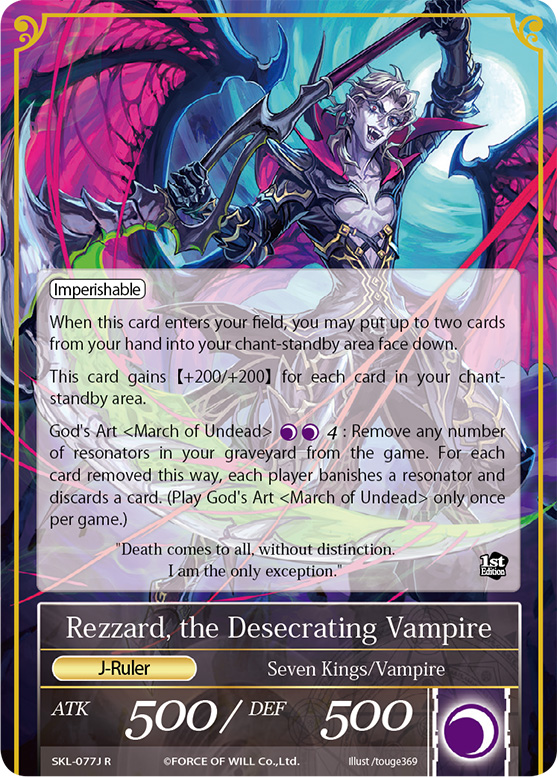 Rezzard is a really complex J-Ruler and with a lot of different abilities: first of all he's Imperishable, it really seems like it's a typical Vampire thing, also when he enters the field he allows us to put two cards face-down in our Standby Area. This ability is already very interesting alone but it becomes a lot more interesting if we consider Rezzard's other abilities: our J-Ruler gains a bonus of +200/+200 for every card in our Standby Area, so basically the J-activate powers his stats and creates two unknown threats for our opponent on our field, all at the same time!

The sly Rezzard's strategy is revealed at the end with his God's Art: March of Undead!

Removing any number of Resonators from our Graveyard we can discard our opponent's whole hand and at the same time destroy all his Resonators on the field while ours will be safe on their “tombs” on the Standby Area ready to make their appearance later!

As we already know the Seven Kings are famous for their Regalias more than for their crowns, so here's Rezzard's one: Deathscythe, the Life Reaper! 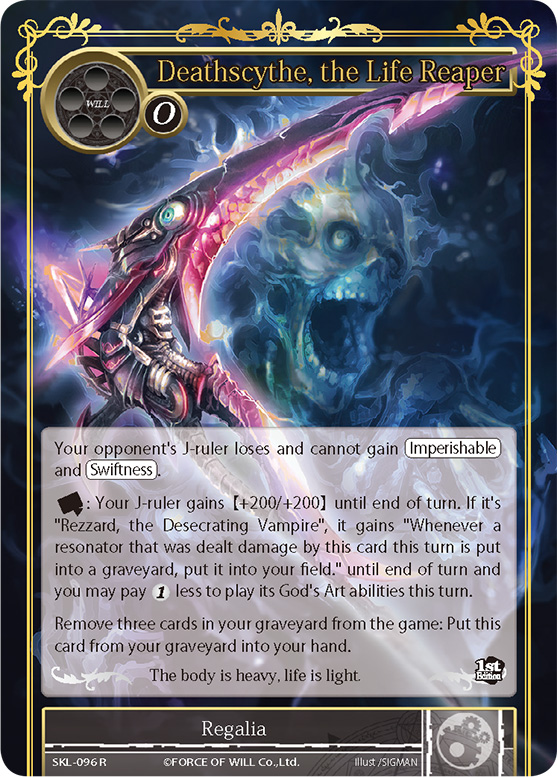 The Life Reaper will surely be played a lot, its first ability ends Bahamut reign of terror whose deeds are told at other tournaments around the world: that's because the J-Ruler of our opponent loses and can't gain Imperishable neither Swiftness.

By exhausting it our J-ruler gains a bonus of +200/+200 and if it's Rezzard it gains the ability of his more nobler precursor Dracula, since every Resonator who took damage from our Vampire and goes to a Graveyard will be resurrected under our control!

Surprises don't finish here: the Deathscythe gives Rezzard a litte discount on his God's Art but the most important thing is that by removing any three cards from our Graveyard we can get back in hand this Regalia when it's destroyed. So as long as it's in the Kingdom of Death Rezzard's Scythe will always be a threat ready to be unleashed on the field!

But what is a King without his generals? So here's the “stealthy” comrades of our Ruler! 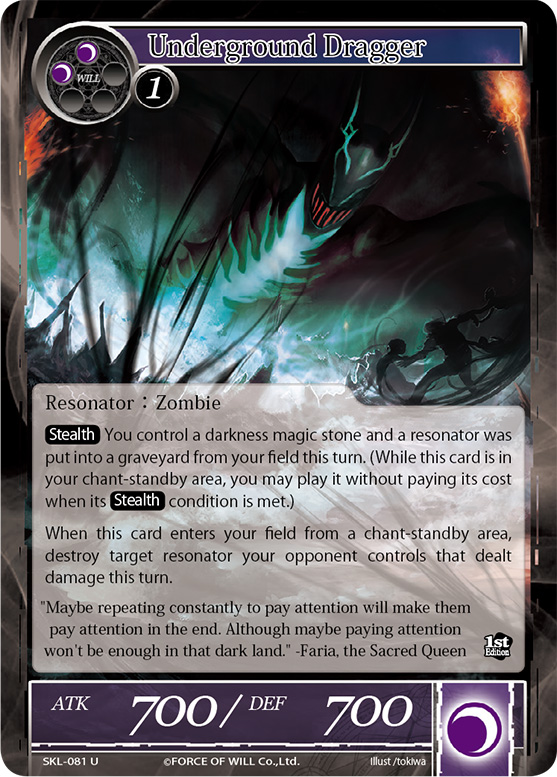 The Underground Dragger is a resonator at cost three with medium stats, his strength is actually in his new ability “STEALTH” that allows us to summon him from the Standby Area! If we put him on field this way the Underground Dragger will be able to destroy an Opponent's Resonator who dealt damage to us during this turn and also be ready to defend us from further attacks or immediately rampage on the empty field of our opponent during the following turn!

Worthy soulmate of Rezzard is Persephone, the Nether Empress! 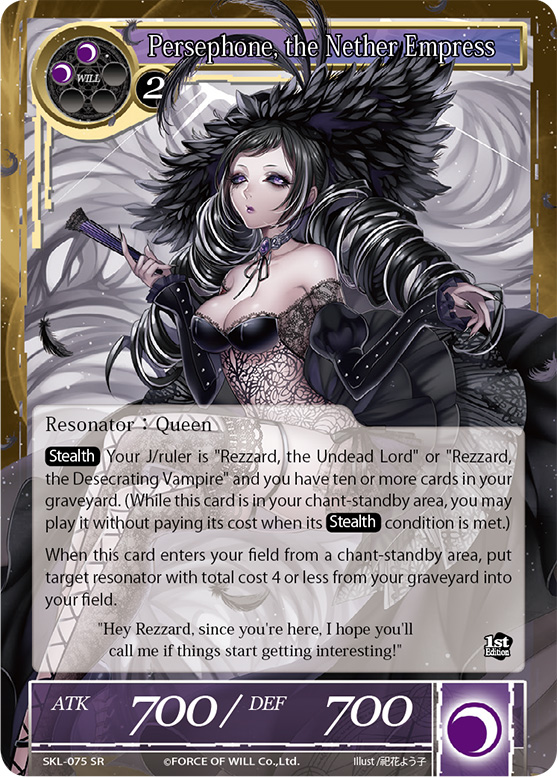 She's indeed a resonator capable to make a difference: being able to summon on the opponent's turn two resonators can really turn the match. Now the opponent must be wary of what he makes us discard from our hand, since Persephone can resurrect even Mephisto, we just need to have 10 cards in our graveyard. Having seen the cards up till now I can grant you that's not a difficult task!

We already saw with Faria and Melgis the return of the Arthurian theme and Rezzard as well  has his allies from the Kingdom of Camelot: Merlin above all! 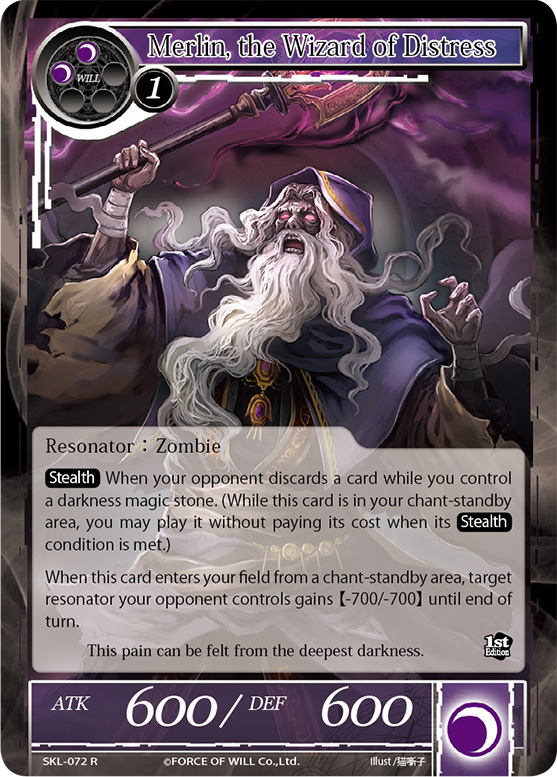 Once the ancient sorcerer enters the field from a Standby Area ( I think that making our opponent discard a card for us darkness lovers it's not that hard) it can give a really big malus to a target Resonator, and that makes him able to battle easily with giants of the height of Hamelin's Piper for example.

Real engine of the deck is a Common card that , experience teaches us, is were we usually are confronted with the most amazing surprises... 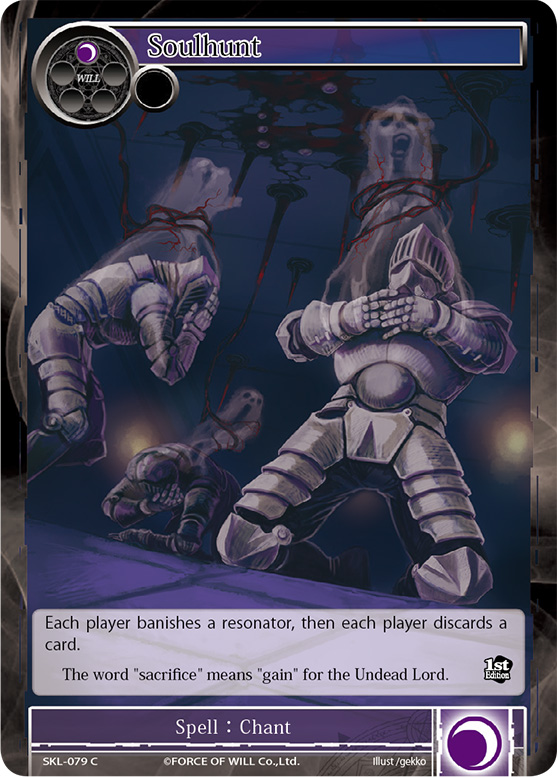 Soulhunt could only get stronger than this only if it was a Chant-standby in this kind of deck. At the cost of a single Darkness Will it basically does everything: it allows us to increase the ranks of our allies in the graveyard and at the same time it attacks both the hand and the field of our opponent... I really think this card is way too strong to be ignored and we'll see it played in a lot of archetypes and not only in combo with our favorite Vampire!

That's all for today, I hope the new dynamic “STEALTH” is now more clear to all of you, but if you have any questions don't hesitate to contact us on the Facebook group or in the Forum!!!