Welcome back to a new spoiler article of Force of Will. Today we'll see a brand new Resonator's Race: the Fairy! Let's start from the Ruler... 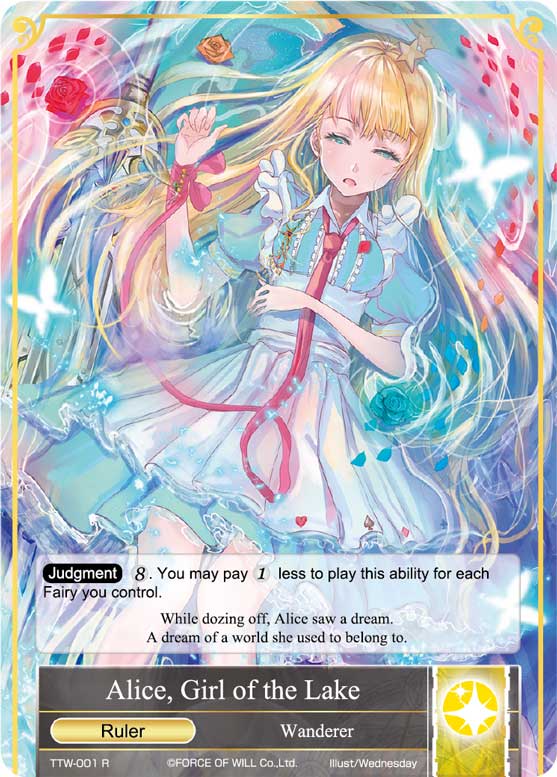 Alice, Girl of the Lake is the Light Ruler of The Twilight Wanderer and she doesn't have any ability except for the Judgment (the new name of J-Active) that cost 8 generic Will. The Judgment cost is reduced by one for each Fairy Resonator we control, a perfect sinergy fo a Fairy based deck. Overall Alice, Girl of the Lake, is bond to a very specific deck type, in similar way to Puss in Boots from Crimson Moon Fairytale. 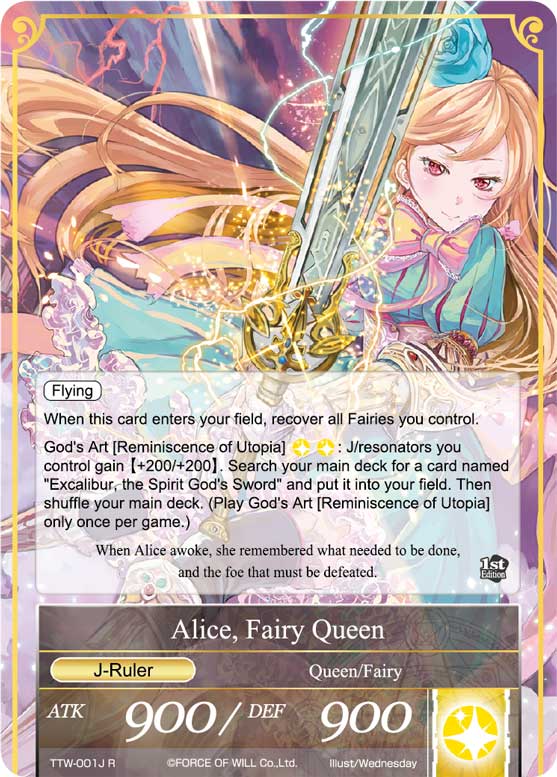 As J-Ruler, Alice became the Fairy Queen and, at her enter, allow us to recover each Fairy we control giving us a chance to re-use their Active ability, attack or be ready for defence. Alice's God Art is Reminiscence of Utopia which, at cost of two Light Will, buff any Resonator or J-Ruler on our field until the end of the game, making our Fairy more powerful and aggressive. When we'll use her God Art, we'll can search our deck for her Regalia Excalibur, the Spirit God's Sword and put it on the field without paying its Will cost. This is a clear reference to the Lady of the Lake, keeper of the Sacred Sword Excalibur in Arthurian Cycle. At last, Alice, the Fairy Queen has the keyword Flying and ATK/DEF value higher than most of SKL Rulers and, with 900 DEF, she is resistant to the biggest threat for a J-Ruler: Flame of Outer World. 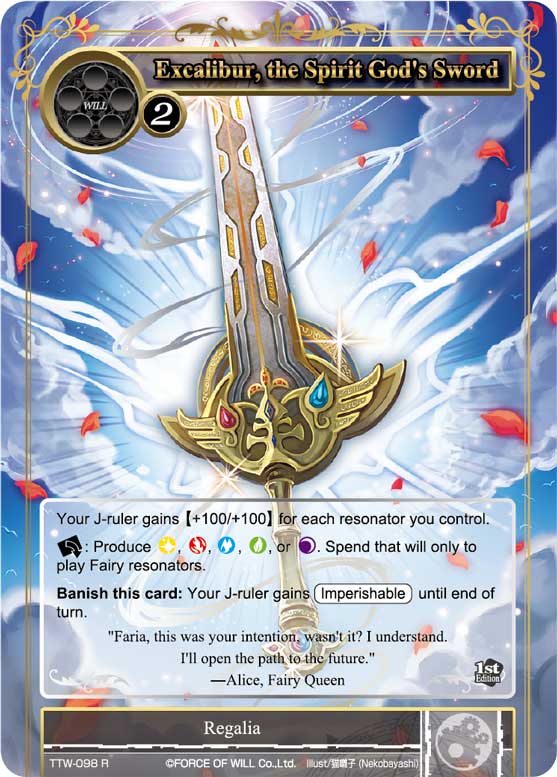 Excalibur, the Spirit God's Sword is the Alice, Fairy Queen's Regalia it's the second versione of King Arthur's Legendary Sword in the Force of Will universe. Unlike the others Regalia from SKL, this Excalibur cost 2 Will, which makes it more containable with counterspells like Keen Sense. The static bonus of [+100/+100] for each Resonator we control makes Excalibur a very relevant resource for a deck with a lot of Resonators on the field. Excalibur gives its best in a Fairy deck due to its ability to rest for produce one Will of any attribute, usable only for casting Fairy Resonators. As Faria's Excalibur, even this one can be banished for giving Imperishable to our J-Ruler. 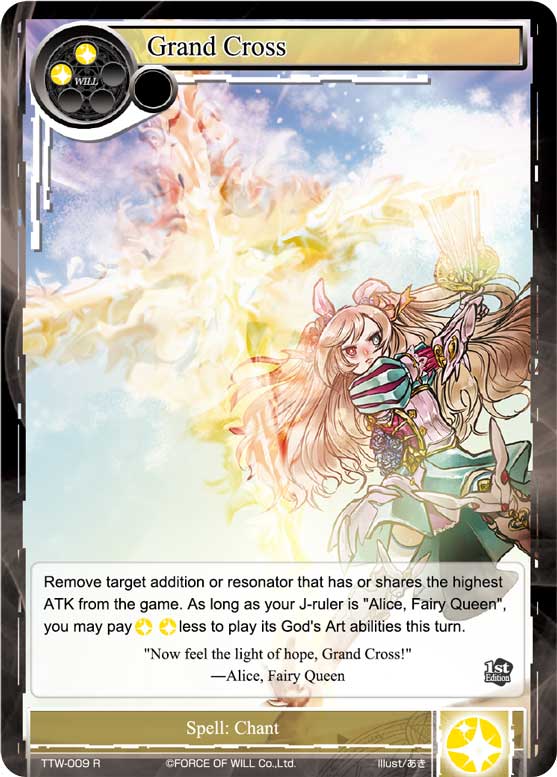 Grand Cross is a good Light removal that, at 2 Light Will cost, allow us to remove an Addition or the Resonator with the highter ATK on the field. However, we must be very careful with the timing for playing this card at best for Grand Cross in a Magic:Chant and we can't chrose a Resonator different from the ones with highest ATK. Grand Cross  is a must have card for every Alice, Fairy Queen deck because of its side effect that reduce to 0 the cost of Alice's God Art. 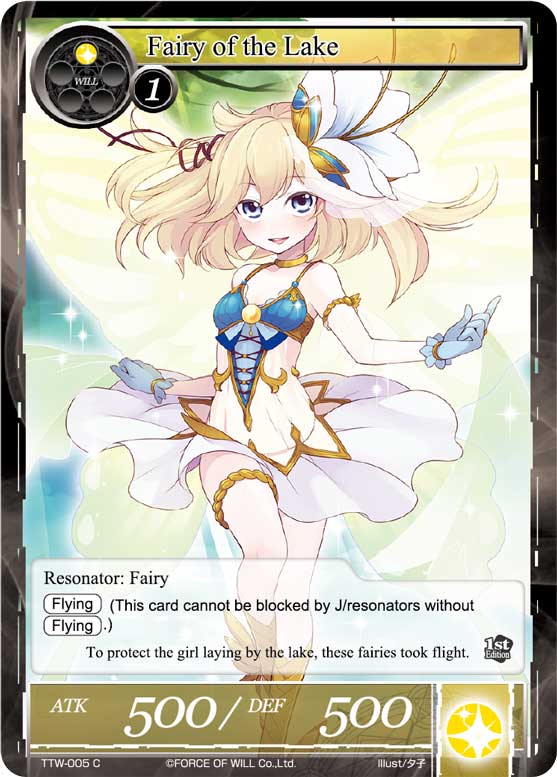 The first Fairy Resonator is the Fairy of the Lake, a simple 500/500 with Flying. Fairy of the Lake doesn't have new mechanics of surprisingly good stats but in Limited it can be aver good low Will cost pick. In Alice Block it can fit well in a Fairy deck. 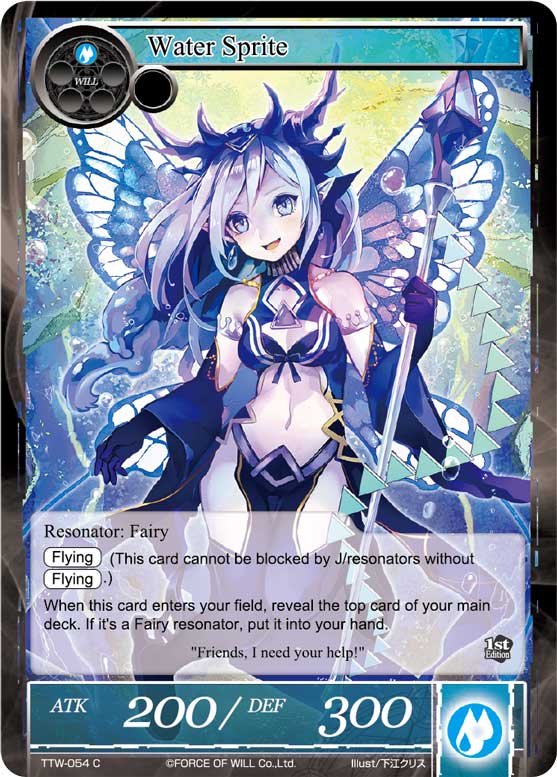 Water Sprite is a 1 Water Will Resonator and a good card advantage tool for a Fairy deck. Entering the field, Water Sprite allow us to reveal the top card of our library and, if the revelaed card is a Fairy Resonator, add it to our hand. Water Sprite has the keyword Flying, making it a good cheap defender against any other Flying Resonator. 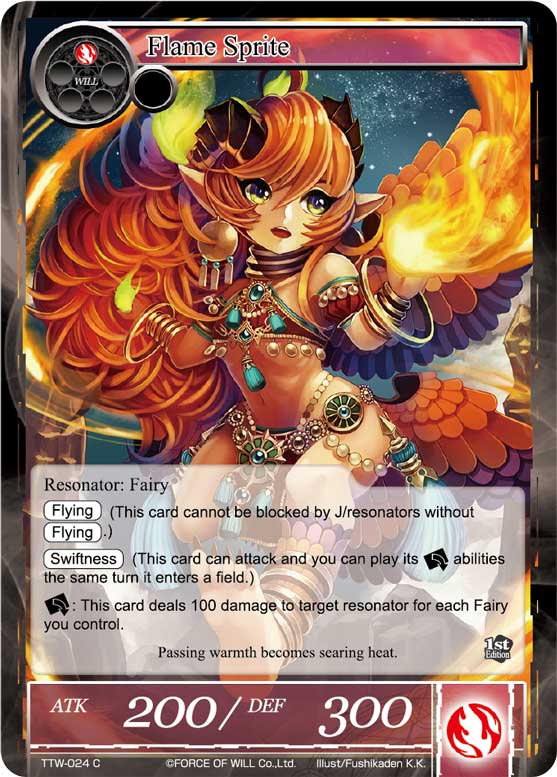 Flame Sprite is a very interesting Fairy Resonator and not only for the 1 Fire Will cost. In addition to the keywords Flying and Swiftness, that alone assure us that this card will see play, resting Flame Spirt we can deal 100 damage to a target Resonator for each Fairy Resonator we control, making her a recorsive removal for a Fairy Deck. 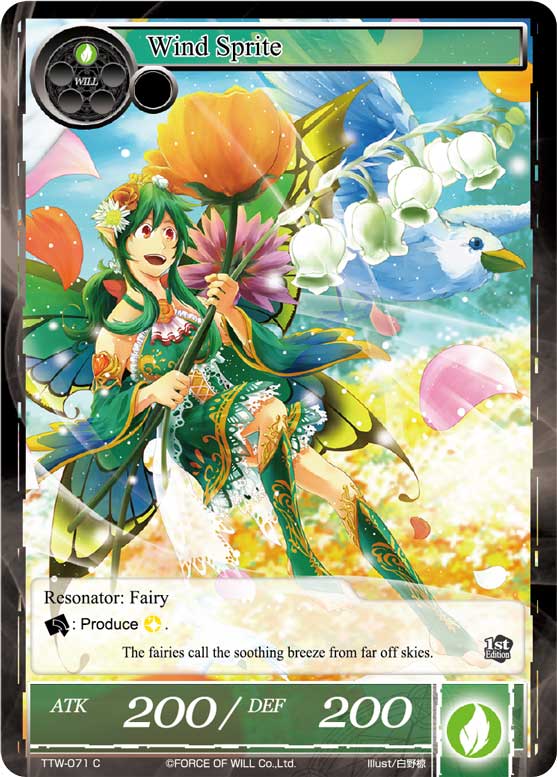 The last Fairy we'll se today is the Wind Sprite, a cheap Wind Resonator that will see game not only in Fairy Deck but in everyone that need Will ramp. Resting this Resonator will produce a Light Will, expendable for every type of cards or ability and not only for Fairy ones unlike the new Excalibur rest effect. In constructed, Wind Sprite is a viable alternative to Elvish Priest for an easy fix of Light Will specific costs. The only weak point of this Fairy is the lack of Flying, but it's still a good card.