Kings Unleashed : The Darkness Behind the Mirror

Welcome to this new spoiler episode of Kings Unleashed, dedicated to the new series, the Twilight Wanderer. In particular today we'll talk about the new Dark Ruler that is Girl in Twilight Garb. 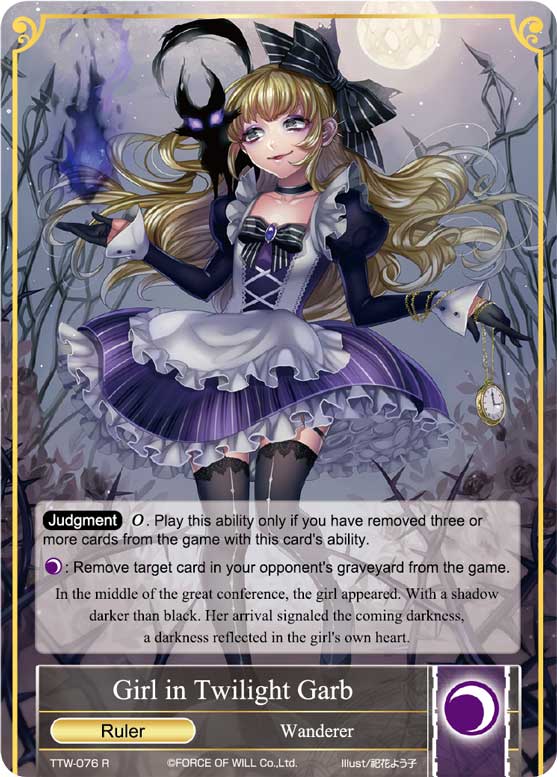 The Girl in Twilight Garb is a Ruler with just a single ability beside the J-Activate. She can, at the cost of a single Darkness Will, remove a card from our opponents graveyard. Besides weakening the strategies of decks based on the graveyard, like a Rezzard , this Ruler allows to efficiently answer to cards like Necronomicon or spells with the Remnant ability. Her activate ability is fundamental for being able to use her J-Activate that, even if it has a Will cost, it requires the opponent to have at least three cards removed from the game thanks to her ability. 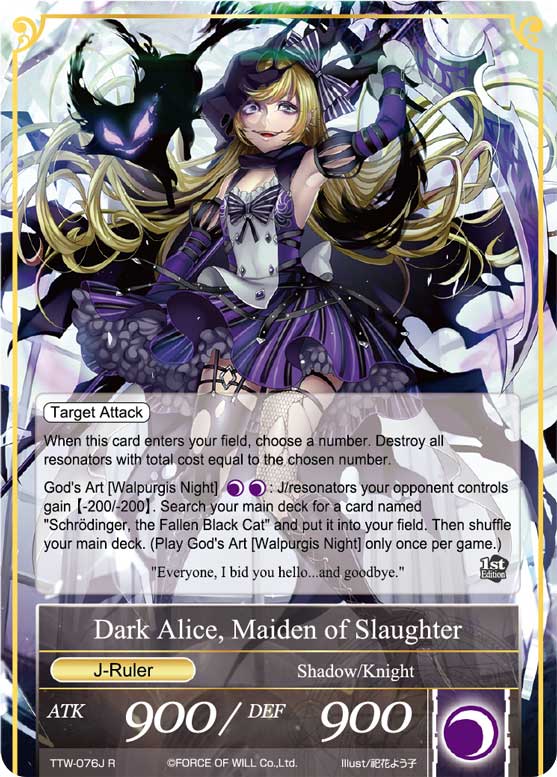 The J-Ruler form of the Girl in the Twilight Garb is the dark counterpart of one of the most loved heroines of Force of Will: Dark Alice, Maiden of Slaughter. Like Alice, the Valkyrie of Fairy Tales she is a Knight and has 900/900, decent values of ATK/DEF for an Alice Cluster J-Ruler, the the Target Attack Symbol Skill. When she enter the field she'll act as a removal for the opponent resonators, allowing us to choose a number and to destroy all resonators with total cost equal to that number. This ability makes Alice a good J-Ruler for control decks, since with her we can selectively destroy and even wipe untargeatable resonators.
Dark Alice, Maiden of Slaughter has a God's Art called Walpurgis Night, name that many of you have probably already heard on japanese animation operas but that historically is referred to ghe night of the 30 of April, that according to germanic tradition were the night when witches meet to perform rituals. This God's Art has a low cost, only two Darkness Wills, and an effect similar to the Spell: Chant-Instant Endless Night, allowing us to weaken all resonators and J-Ruler of our opponent and acting as a board wipe for the whole match. It also allows us to search in our deck her Regalia: Schrödinger, the Fallen Black Cat and put it on the field 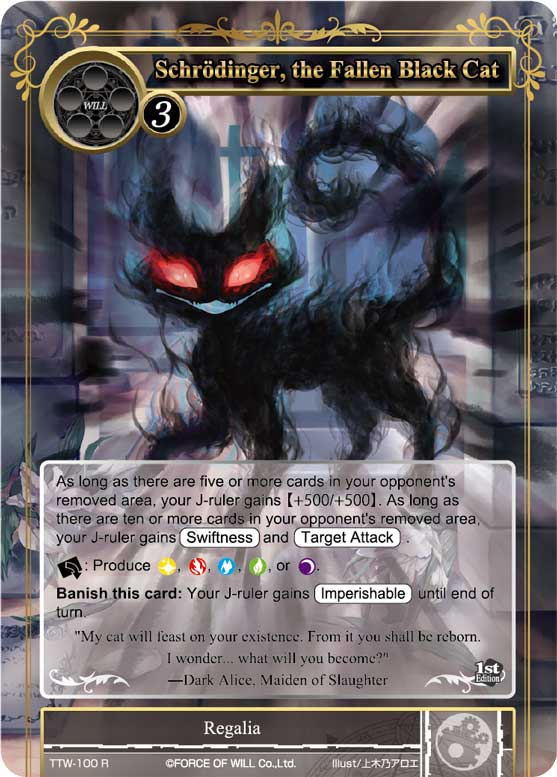 Schrödinger, the Fallen Black Cat is a Regalia different from all the ones we saw on the Seven Kings, since he has a cost of 3 generic Wills. However Schroedinger is less linked that Excalibur, Laevatein or the Horn of the Sacred Beasts. In fact, he never mentions the need of having Dark Alice as a J-Ruler but only about the fact that our opponent must have cards removed from the game and there are a lot of cards that could help us on that, like Blazer, the Devourer of Dimensions or Light of Lumia. Based on the number of removed cards of our opponent, Schroedinger will give a lot of different cumulative bonuses to our J-Ruler, starting with a bonus of +500/+500 and ending with the Symbol Skills Swiftness and Target Attack, a combination that we know is devastating. This Regalia has other two activated abilities. The first one allows us, exhausting him, to produce a Will of any attribute. The second one allows us , banishing this Regalia, to make our J-Ruler Imperishable.
As a curiosity, the name of this Regalia is derived from the Schroedinger Paradox, a famous experiment of quantum physics done in 1935 where the cat protagonist of the experiment could have been both alive or dead at the same time. And the same is for the cards of our opponent that, despite their condition, they still exist for the effects of this card. 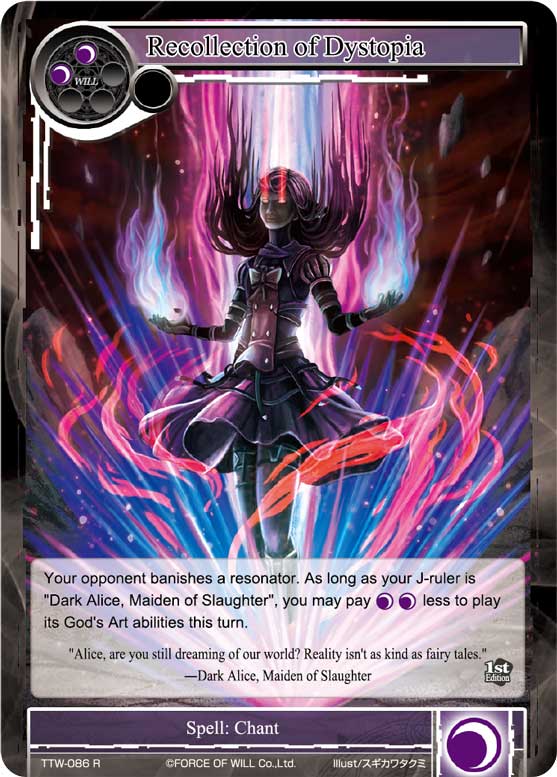 Recollection of Dystopia is a direct removal, that at the cost of two Darkness Wills forces our opponent to banish a resonator he controls. The strenght of this card is that it allows us to remove from the table untargeatable resonators like Purplemist or that could come back like Gilles de Rais, the Golden Dragon. Anyway, not being a Spell: Chant-Instant it will be often difficult forcing our opponent to lose the resonator we want. Inside a deck with Dark Alice, Maiden of Slaughter as a J-Ruler this card gains additional power, since it allows us to play her God's Art without paying it's cost in the turn we play this spell. 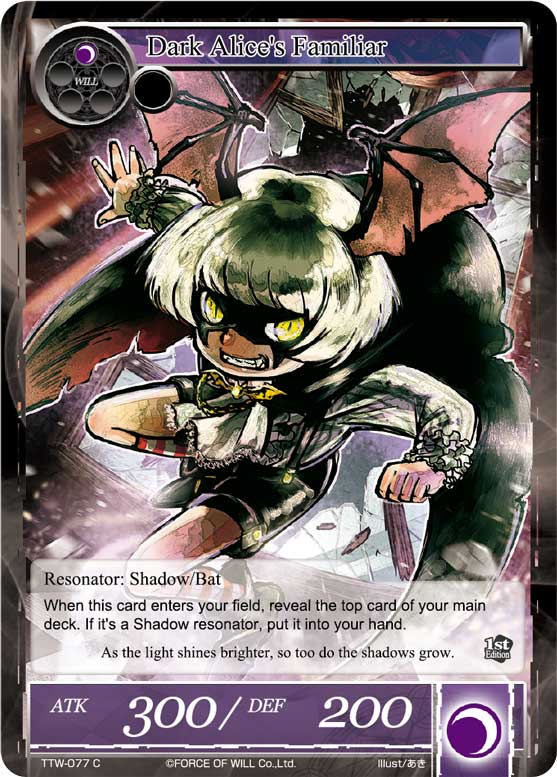 To accompany the Girl in the Twilight Garb there's a whole army of shadows, the smallest and versatile of them is Dark Alice's Familiar, a nice Bat/Shadow with excellent stats for his cost of a single Darkness Will. When he enters, the Familiar allows us to reveal the first card of our deck and, if it's a Shadow Resonator, to add it to our hard, creating card advantage. 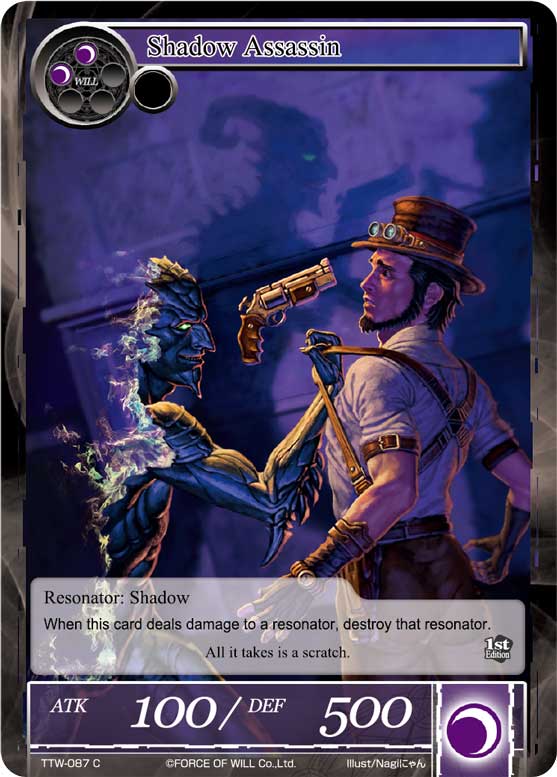 One of the common shadows in the Twilight Wanderer is Shadow Assassin, an extremely defensive resonator with 500 DEF for his low cost of two Darkness Wills. When the Shadow Assassin deals damage to a Resonator he destroys it, regardless of his DEF, similarly to One-Inch Boy. Shadow Assassin proves really useful with Gleipnir, that forces our opponent to block with a Resonator of our choice, or with Duel of Truth. 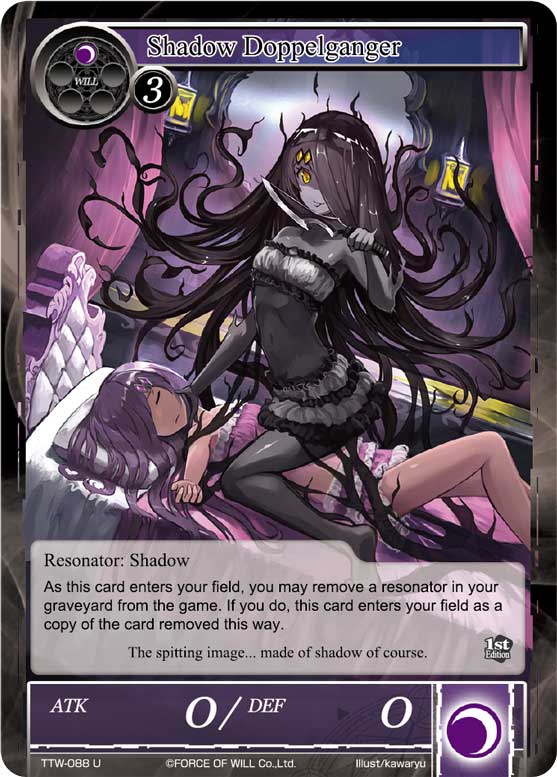 The last shadow we're going to talk about is the Shadow Doppelganger, the evil double of an already dead Resonator. This Resonator is a petty 0/0 at the cost of four Darkness Wills that, when it's entering the field, forces us to remove a Resonator from our graveyard, assimilating it's identity and allowing us to have another copy of our choice of an already dead Resonator. A really good card, especially if we had to discard or we lost resonators with really high costs like Susanowo, the Ten-Fist Sword or Yamata-no-Orochi.
With this card this episode ends here, see you next time with Games Guardians.