KINGS UNLEASHED - THE END OF THE WAR, THE NEW RULER

And here we are again for the third round of spoilers for “The Twilight Wanderer” ! Today, we’ll talk about water attribute and her representative in the Seven Kingdoms, Valentina.

The Ruler of Shangri-La administers the nerve center of the world trade. The city is built in her own image, exceptionally beautiful. This represents completely the concept of these Lands that the ruler has.

In the immediate past, something has upset the balance in the ruler’s mind. Alice’s arrival, for her, was a sign of the Red Thread. She knows that the Wanderer it’s a gift that Destiny itselfs has sent.

Things that have occurred had changed everything. And Valentina knows well the value of alliances in possible situations of war. 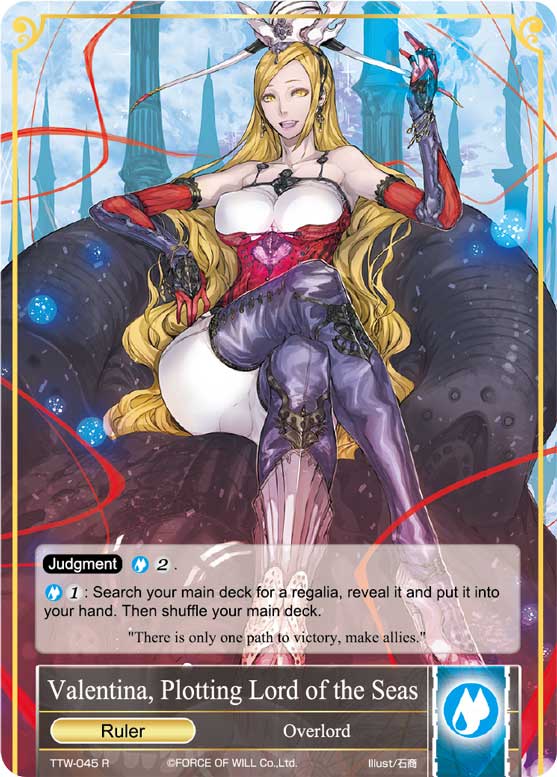 At the cost of one water will and one general, she allows us to search into main deck for a regalia card, making possible to have the right card at the right moment.

Paying one water will and two general, Valentina perform her Judgment.
Dark Alice’s coming has shuffled all the cards and Valentine has made a drastic decision. The complete conquest of the Seven Lands. The world now has a new Overlord. 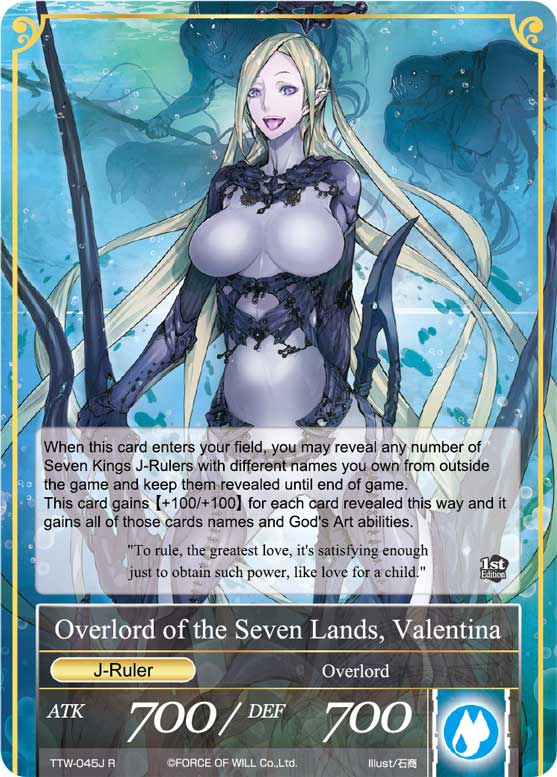 As soon as “Overlord of the Seven Lands, Valentina” comes into play, we can reveal any number of Seven Kings J-Rulers with different names we own from outside the game (a.k.a. SIDEBOARD, not your trading binder!) and keep them revealed until end of game.

For each J-Ruler revealed this way, Valentina gains [+100/+100] and gains ALL the God’s Art and names of those cards.

In the context of the game, we have the whole power of all the Seven Kings closed in a single Ruler. This, at my advice, opens apocalyptic scenarios.

Allowing the use of any God’s Art and Regalia support different deckbuilding situations with the drawback of playing, almost compulsory, multiple attributes.

Valentina, on the other side, is an exceptional strategist and she thought about every possible situation. 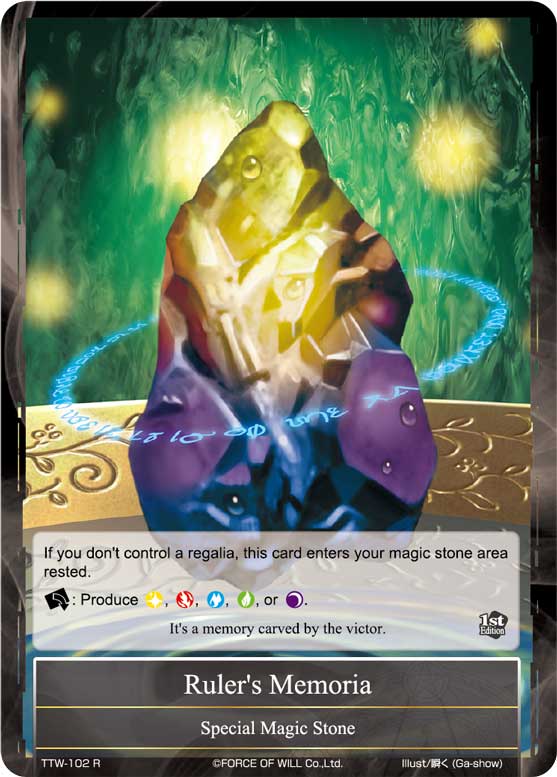 The new Special Magic Stone, “Ruler’s Memoria”, enters into play rested if we don’t control at least one regalia and produces one will of any kind.
Regardless of the context this stone, along with others printed in previous expansions, opens the way to decks with 3 or more attributes, without the annoying problem of not having the right will when we need it. Good Job, Miss Valentina!

A war requires sacrifice and determination. It also requires the whole people united and ready to serve the leader that will march with them in battle. 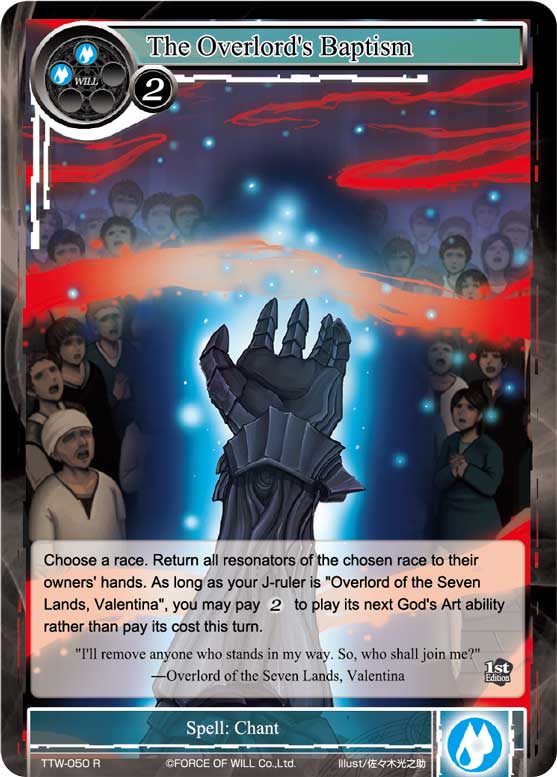 “The Overlord’s Baptism” is a Spell:Chant that at the cost of two water wills and two general, allow us to choose a race and return all resonators of chosen race to their owners’ hands.
This represents perfectly the “With me or against me” philosophy of this ruler!

In addition, as long as our J-Ruler is “Overlord of the Seven Lands, Valentina”, we may pay only TWO general wills to play its next God’s Art ability rather than pay its cost this turn.

The Overlord now has gained people’s approval. This isn’t enough to win a conflict.
To actually win she needs loyal soldiers, elite squads and assault ships. 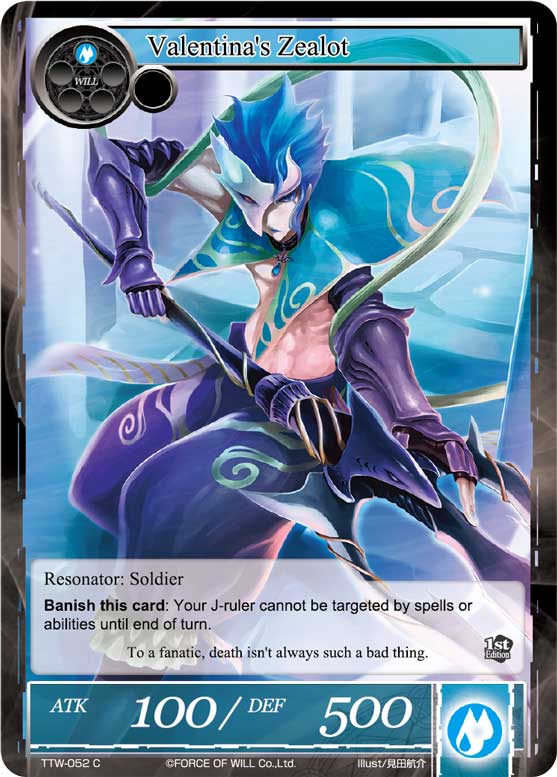 “Valentina’s Zealot” it’s a [100/500] resonator that costs a single water will. If your Ruler’s life would be CASUALLY put at risk by THUNDERS, lightning and undesirable types dressed like clowns, we can banish the soldier to make him not targetable from spell or abilities until the end of turn. 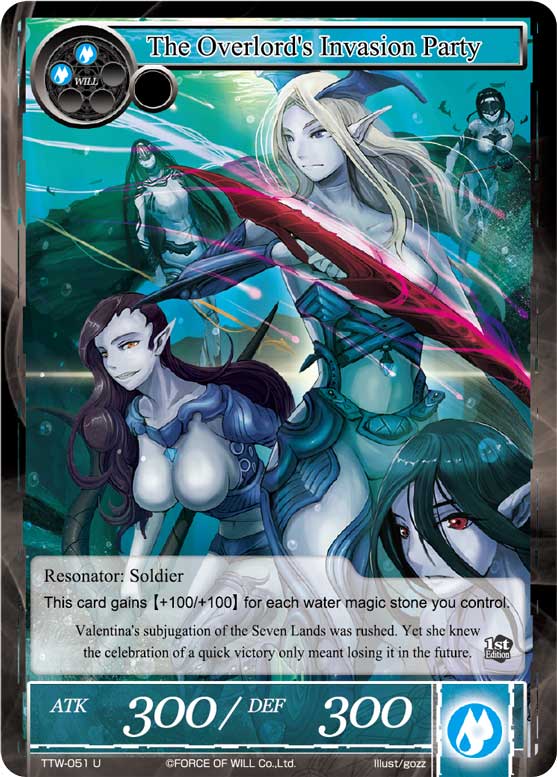 “The Overlord’s Invasion Party” is a [300/300] resonator that costs two specific water wills.
What makes it a concrete threat for the opponent is its ability to gain [+100/+100] for each water stone we control.  Potentially, as soon as it touches the playground, we have a [500/500] that, in the right deck, increase its statistics turn after turn.
Basically , it’s a Navy Assault Troop. 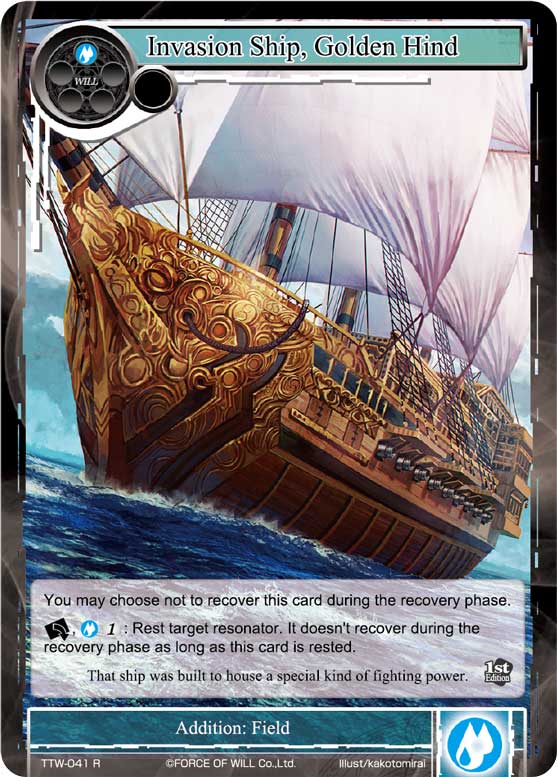 “Invasion Ship, Golden Hind” is an Addition:Field that comes into play paying just one single water will. Resting it and paying one water will and one general will we can rest a target resonator and it’ll not recover during the recovery phase as long as the Invasion Ship remains rested.

And indeed, for its first ability, we can choose to not recover the battleship during our recovery phase.
Nail an opponent’s resonator to the ground is never a bad thing.

And with this last card, we have finished! What will happen in the Seven Lands world after this extreme stance?

We’ll find out in the next spoilers! 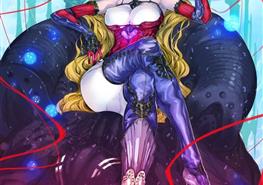