Rise of the Ruler: Mother of Dragons

Hi all and welcome to this crucial episode of Rise of the Ruler. Today indeed we're going to talk about a character that promises to have a leading role on Force of Will's story. She's the founder of the Gill clan, mother of dragons and formidable warrior her power is feared even by Blazer. 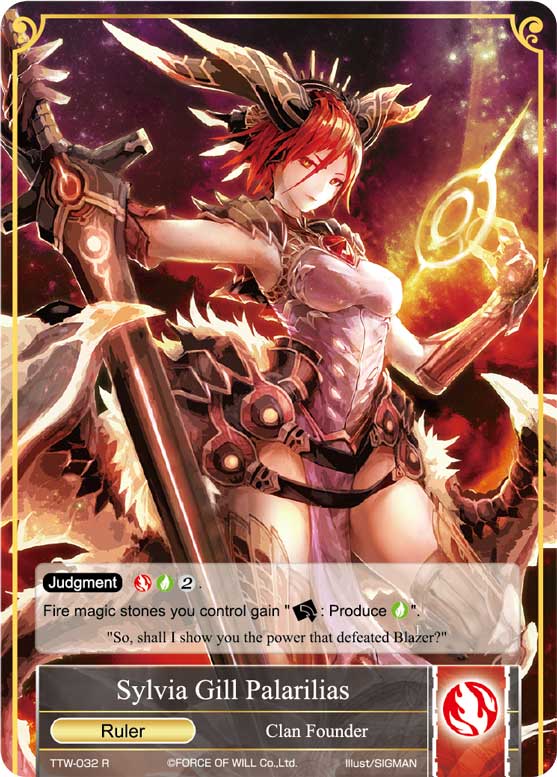 Sylvia has the particular ability of giving our fire magic stones the power of producing Wind Will. The strenght of this ruler ( similarly to Blazer) is the possibility of having a continuous will fixer and thanks to that we can build balanced multi-attribute decks without the need of the dual stones who where present on the Grimm Cluster. In this specific case, adding to a basically aggressive Attribute like Fire the control component of Wind, without the risk of losing our burst, is an advantage too big for not being exploited.

Differently from Blazer, Sylvia has a cost for her J-Activate, that requires 4 Wills, of which one Fire and one Wind ( that will not be a problem paying thanks to her ability). 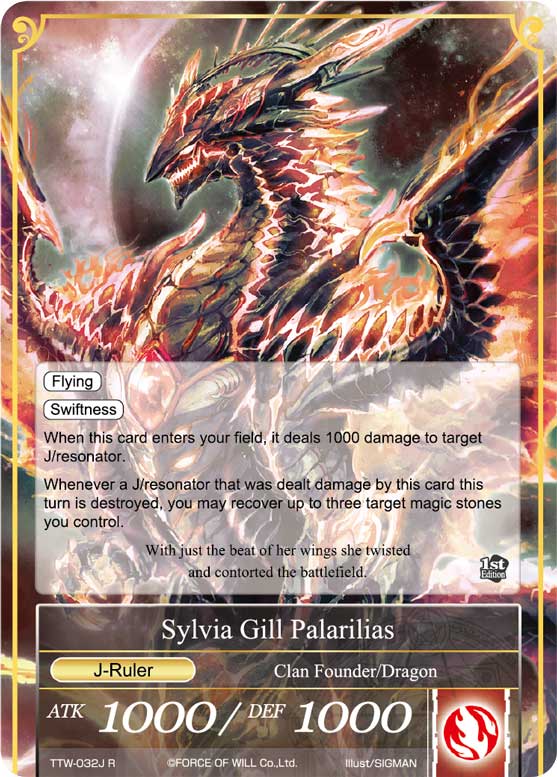 After doing Judgement, Sylvia will lose the ability to make our Fire stones produce Wind , but she will gain the Dragon Race, together with Flying and Swiftness and a nice body of 1000/1000. Her appearance on the field will allow us to deal 1000 damage to a target Resonator or J-Ruler. Being able to heavily damage even J-Rulers is really exciting and will make our Gill Palarilias a really threathening enemy. Few will survive an assault of this magnitude and this will go to our advantage, since every time a Resonator or J-Ruler is destroyed after being dealt damage from Sylvia we can recover 3 magic stones.

With a card like Duel of Truth it's easy to imagine the damage we'll be able to deal both to the field and to the life points of our opponent. We're , without a doubt, in front of one of the new next main characters of the metagame, also because there's a magic like this coming with her: 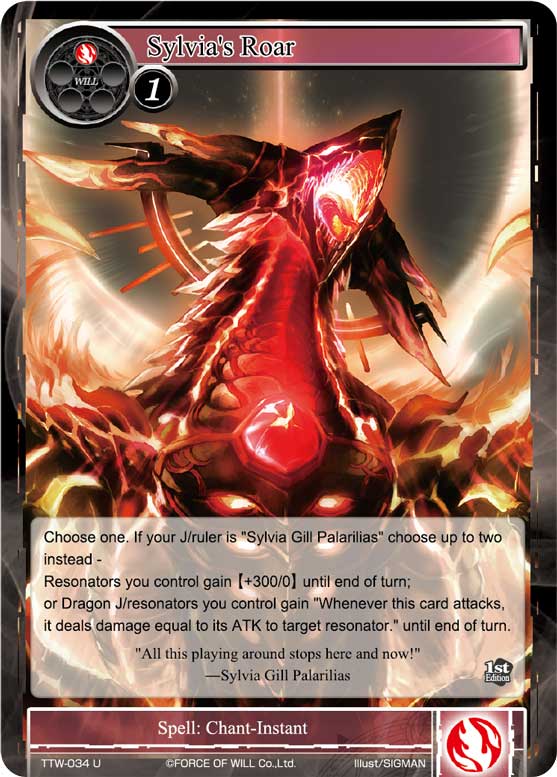 At the cost of two Wills we can play this Chant Instant that brings with it two effects we can choose from: increase the ATK of one of our Resonators by 300 till the end of the turn or make that every Dragon we control ( resonator or J-Ruler) inflict damage equal to his ATK to a Target Resonator when he attacks that turn. If our J-Ruler is Sylvia we can choose both of them. This will allow us to easily destroy our opponent defences and score devastating attacks to his life points.

If after an attack of this magnitude someone was able to survive, we just have to use two of the stones we recovered thanks to our J-Ruler ability and play Beat of the Phoenix Wings. 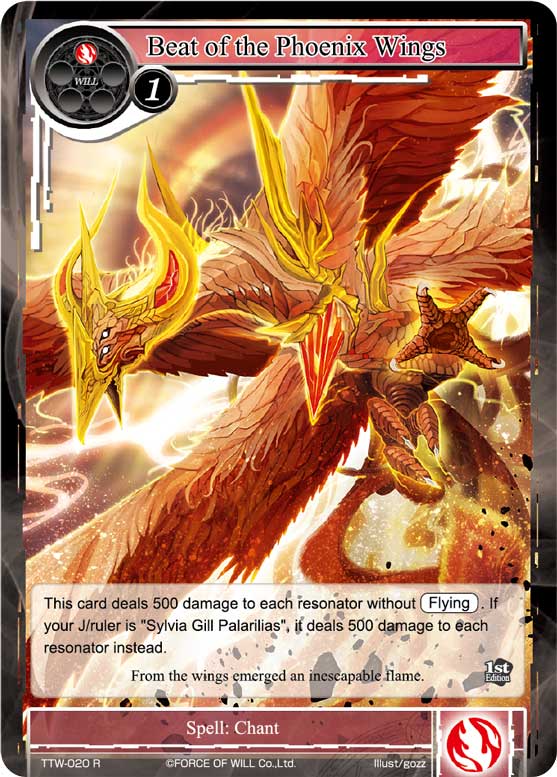 It's not an instant chant like the previous one, but it's not less impactfull: 500 damage to all resonators without Flying. If we control Sylvia we'll shoot to everything that moves instead! If our opponent doesn't have countermeasures, we basically wiped his board just flipping our J-Ruler.

Anyway story tells we can't depend on our Ruler alone. It's good to couple her with resonators ready to cover her. Among all of them there's surely Flame Dragon Commandant 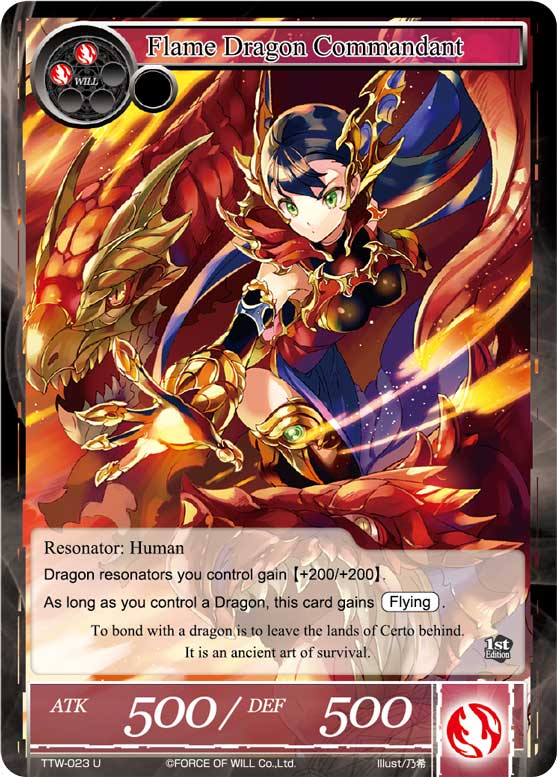 A Human resonator at the cost of two Fire Wills that increases the stats of our Dragons by 200 points. Also, if we control a Dragon, she gains Flying. Although her 500 ATK/DEF she's a good support for a thematic deck, because increasing the stats of our attackers she makes them even more dangerous. The cost is fair, so we can give her a couple of slots in our decks.

One of the dragons that will benefit from the Commandant is surely the Caldera-Born Dragon. 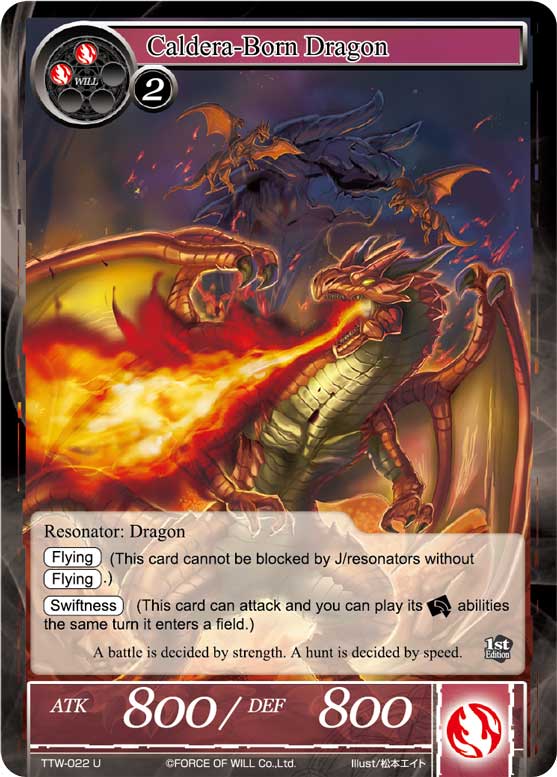 A 800/800 at the cost of four Wills of which two specific Fire with Flying and Swiftness. Basically the essence of efficiency without frills. If we want a beater who's  medium-high on curve this dragon is for us. Really good on a thematic deck and especially on limited. A little undertone if we evaluate him out of dragon context, even if with the Commandant he's still a 1000/1000 Flying and Swiftness.

We've come to the end of this showcase of spoiler centered on dragons. Like we previously said, it seems this archetype of deck it's finally finding his place on the Force of Will world, especially in the Alice Cluster. Anyway we think Sylvia is a Ruler that will find a spot even outside her thematic deck because her impact on the game is always favorable, with or without dragons.