Fairy unchained: guardians of the lake

Welcome back to a brand new spoiler spoiler of "The Twilight Wanderer", this time we will talk about the new resonator's race that we have yet seen in the article of Light Alice, the Fairies. The Fairies are the ideal cads for a tribal deck, with strong synergy and interaction among them, and in this case they seems really strong, also counting the yet spoilered fairies. 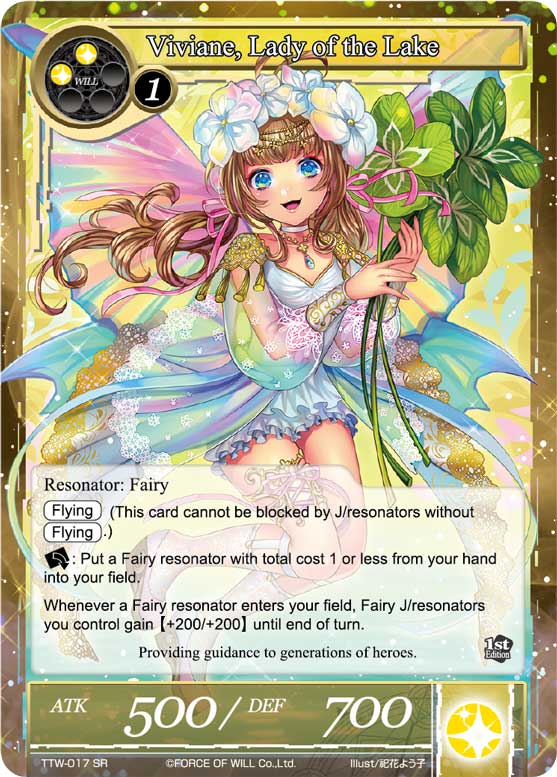 The first fairy that we spoiler is Viviane, the Lady of the Lake, commander of the fairies and guide of heroes. Viviane is a light resonator [500/700] at 3-will cost and the keyword Flying, a solid card also for defense, but the true power of this fairy is the combination between his acrive ability and his continuous effect. Resting Viviane we can put in the field a 1-will cost fairy from our hands, regardless his attribute, making an unexpected blocker or to have a resonator who can attack or rest in our next turn. When a fairy enter the field under our control, either for Viviane's Actived ability or by casting them,  the Lady of the Lake will provide +200/+200 bonus to any Fairy Resonator or J-Ruler we control, a great boost for attack or defense. 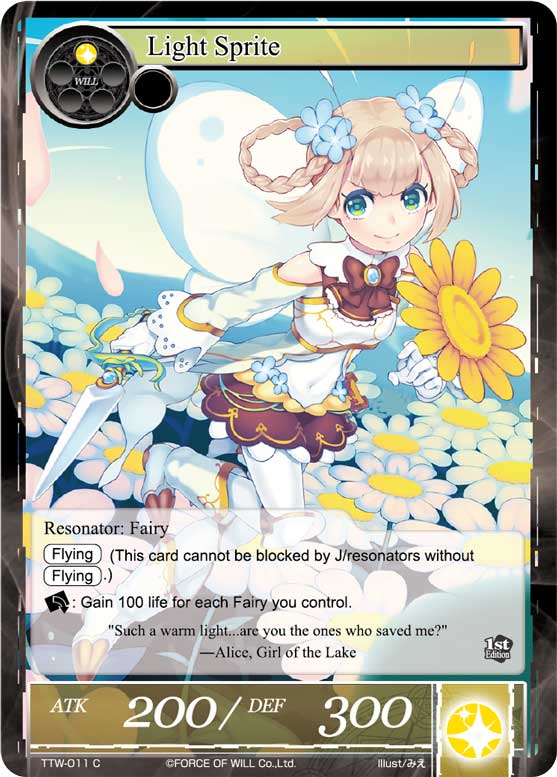 The Light Sprite is a 1-will cost Fairy Resonator that we will play together Viviane due the sinergy with her active ability that allow us to play light spirit in the end of opponent turn.  The Active Ability of Light Sprite can be really
game-breaking in many matchup, allowing to recover a lot of life points just resting her. In Alice's Cluster Light Sprite work really well with Gloria's Castle Town. 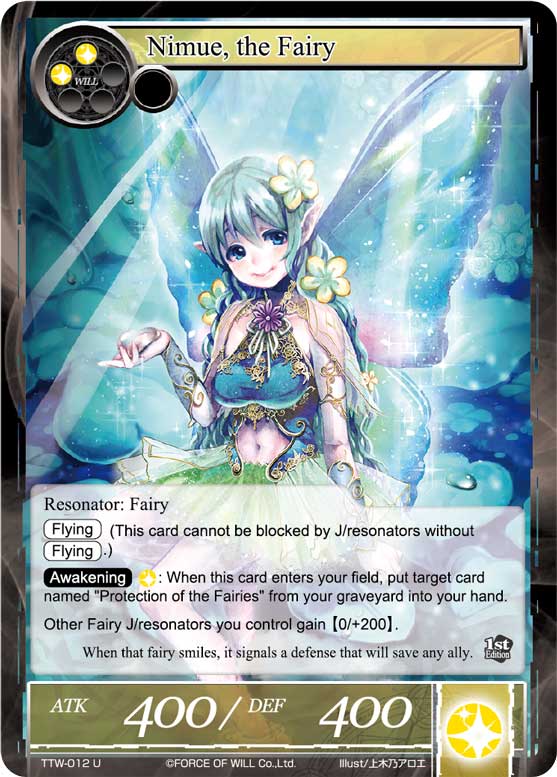 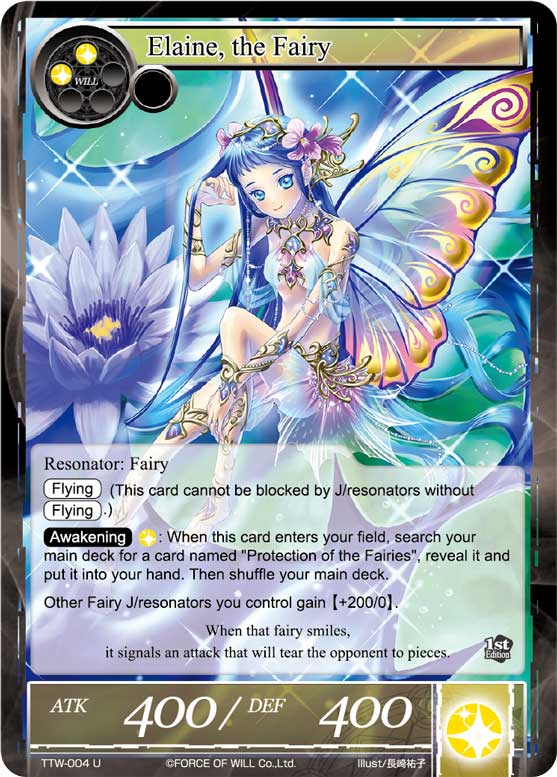 Elaine, the Fairy and Nimue, The Fairy are two specular Fairy Resonators, with the same will cost, Flying, ATK/DEF 400/400, and a Awakening at 1 light will cost that allow us to search a card named "Protection of the Fairies" in our deck and put it in our hand.  The only true difference between Elaine and Nimue are the static bonus that the two fairies give to our other Fairy Resonators and j-Ruler. Nimue is more defensive, with a bonus +0/+200, who will bring the def of all the fairies over 500, saving them from removal like Artemis, the God's Bow or Flame King's Shoute.
Elaine is the aggressive counterpart of Nimue and she giva +200/+0 bonus to each other fairy Resonators and j-Ruler we control, giving us lot of aggro potential. Elaine, in combination with Viviane continue ability, can surprise our opponent with a really consistent boost to our fairy resonator in the turn that she enter the field. 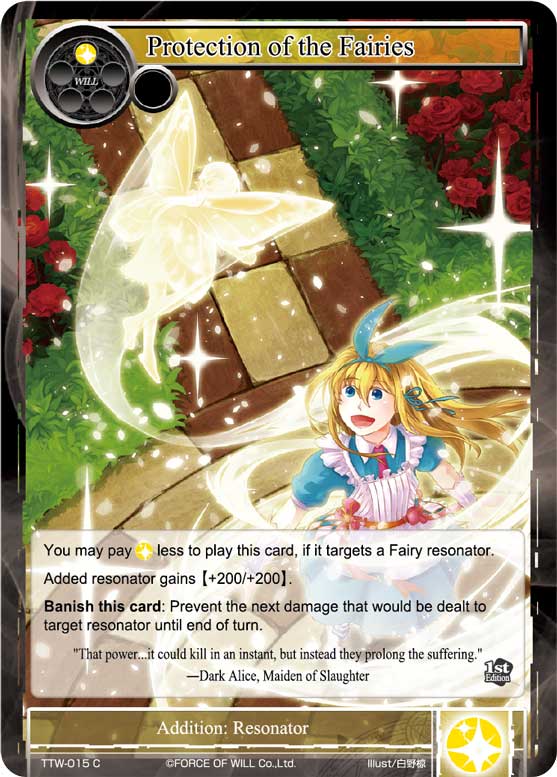 The card that Nimue and Elaine can serach in the deck thanks to their Awakening ability is the Protection of the Fairies, a 1-will cost light Addition:resonator that give +200/+200. The bonus of this card is no really relevant but if we target a fairy-type resonator this card can be played without any will cost. At least, Protection of the  Fairies has a secondary effect, banishing it we can prevent the next damage that would be dealt to target resonator this turn, saving fairies from removal or combat trade. 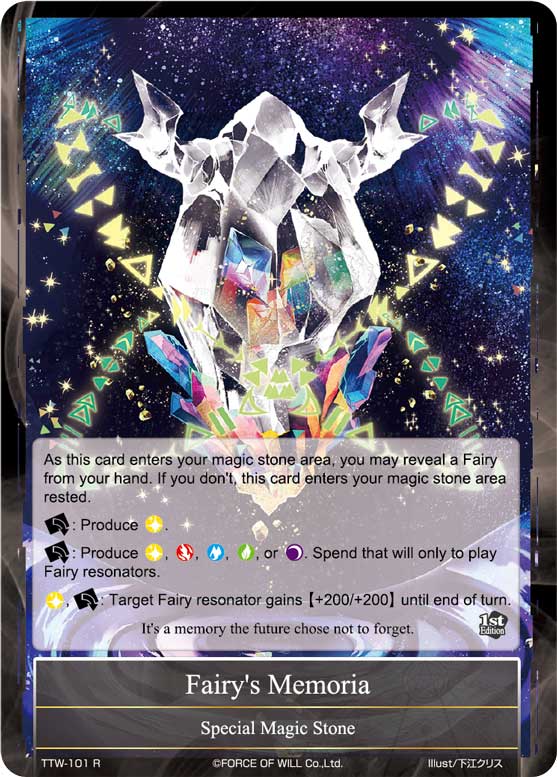 As we seen, Fairy Resonators are not only Light Attribute, and without Grimm Cluster special stone we will have hard time to play Light or Fire fairy Resonator at turn one. But the Fairy's Memoria help us to play a Fairy tribal deck. This special magic stone is tailormade for fairies, due it can produce any attribute will expendable only for playing fairy Resotnators, and it had the active ability of buffing a target fairy resonator. At last, resting the Fairy's Memoria we can add a light will for any use, not only for fairy.
Before closing this article , here is a little curiosity about the names of Viviane, Nimue and Elaine. All three names of the Fairies are referred to Arthurian Romances, already taken several times in Force of Will also for the Knights of the Round Table and Excalibur, and are all related to the Lady of the Lake. In fact, this character is one of the most controversial and reinterpreted of the Arthurian Romances, since different authors call it with different names and attribute the her different role from story to story.
See you next time from Games Guardians.