Rise of the Ruler: The Weaver of Myths

Hello everyone and welcome to the latest instalment of “Rise of the Ruler”. We’ve already seen some of the incredible cards coming out in the 3rd set of the Grimm Block; The Moon Priestess Returns, but now it’s time to delve back to the myths and legends and take a look at the brand new Pandora making an appearance this April. 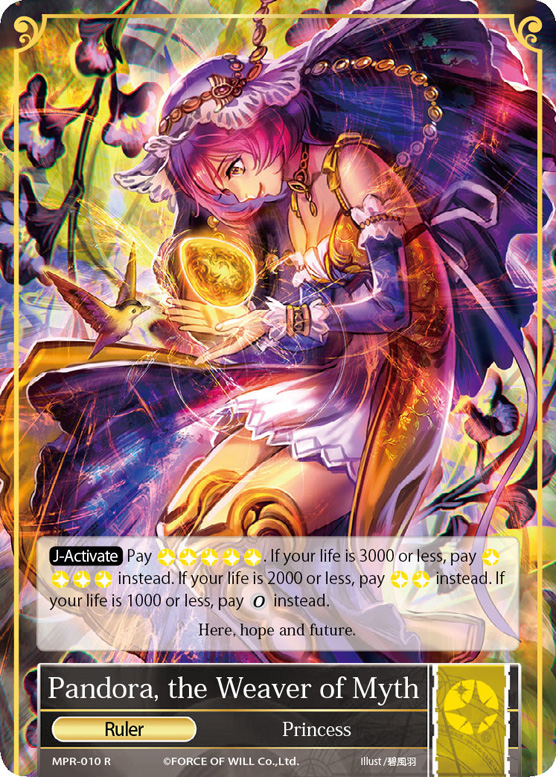 Like her previous incarnations, Pandora, the Weaver of Myths has no Ruler abilities, but unlike her predecessors, has a unique Ruler side and J-Activate cost. At full life you will need to pay 5 Light Will to J-Activate, but for every 1000lp you lose, that cost is reduced, until at under 1000lp where this cost is reduced to 0. The lowering cost of the J- Activate can act as a deterrent; your opponent might try to avoid dealing damage to you to avoid having to deal with the J-Ruler in the early game, and the longer you wait before J-Activating the better the value you can gain from it when you do. 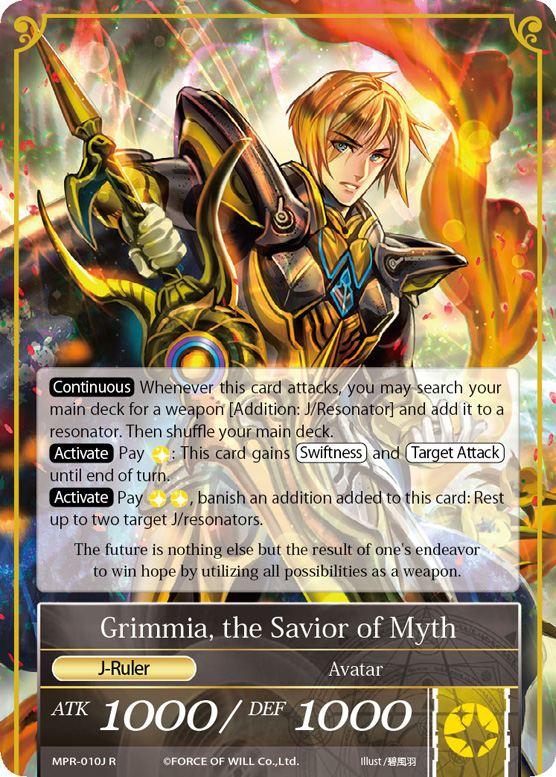 Grimmia herself comes with 3 abilities. Her first ability allows you to search your deck for any [Addition: J/Resonator] whenever she attacks and to add it onto herself. This can power up Grimmia to contend with the biggest of resonators. 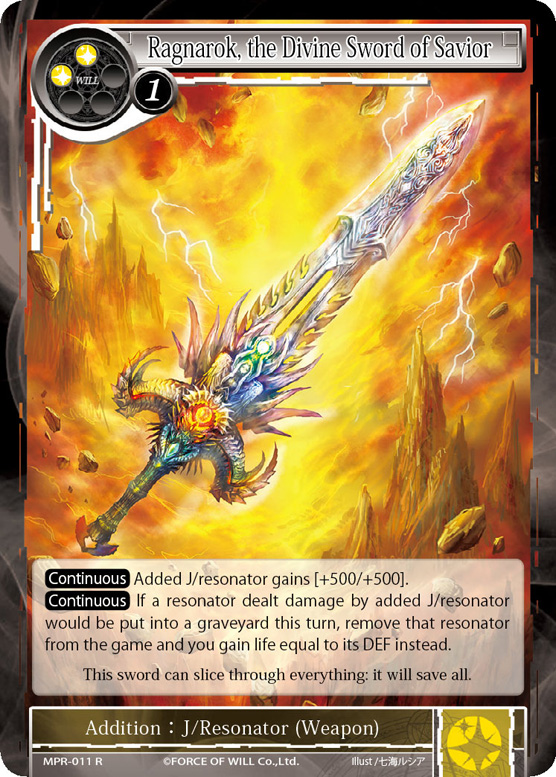 Her second ability allows you to pay 1 Light Will to gain Swiftness and Target Attack. Swiftness, and Target Attack!? Because of swiftness you can straight away after J-activating hit for damage and turn the game around in an instant. The final ability allows you to pay 2 Light Will and banish an addition attached to Grimmia to rest up to two Resonators your opponent controls. The cost seems a little steep, but being able to shut down your opponents resonators so they can’t block can be really powerful to force attacks through, take a look at Hamelin’s Pied Piper. Of course the ability to search an Addition is only as good as the Additions themselves which leads up on to Ragnarok.

Ragnarok from Norse mythology is commonly used to symbolise the end of the world. In this case it is the weapon summoned by Grimmia to aid in the fight and hopefully end your opponent. The main thing to notice about this Addition is that you can equip it to a J Ruler too! Due to this not only can you power up your resonators you now have the option to

turn your J Rulers into even bigger threats. Just like Longinus this card gives the added target +500/+500 which can turn even the smallest of cards into relevant attackers. Additionally for one extra mana if the added target would deal damage to another resonator and that resonator goes to the grave you gain life points equal to its defence not to mention it is also removed from the game which hampers necronomicons power This ability to gain life is rare and helps support Grimmia since you want to be at a low life to J-Active for free. There are two more spells we can reveal to you today, an [Addition: Resonator] and a [Spell: Chant-Standby]. 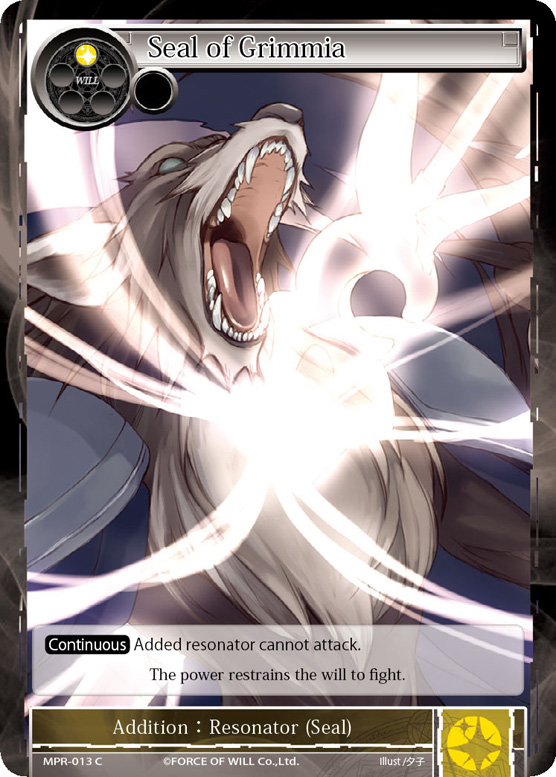 We’ll take a look at Seal of Grimmia, a 1 cost Addition that reads “Added Resonator cannot attack”. It’s a simple stun card that has many uses. It can force your opponent to waste Addition removal on allowing you to play other Additions without fear of them being destroyed, or can protect you from heavy hitters such as Mephistopheles, the Abyssal Tyrant. However this card doesn’t prevent the added Resonator from blocking so be careful when you attack. 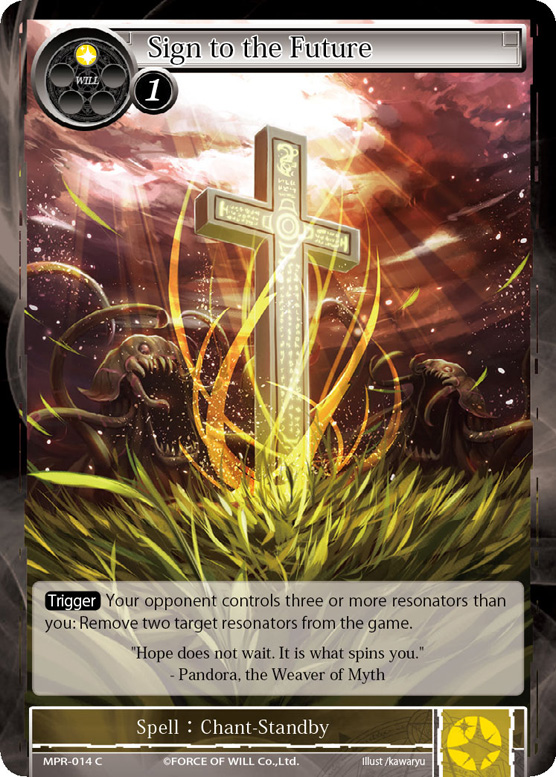 Great Scott Marty! Sign to the Future is a spell standby that once it triggers can leave your opponents field wasted.

It removes 2 target resonators from the game but only when you are behind on the board, your opponent needs to control three more resonators than you do to trigger this card. Because of the triggering condition this card might not be best removal card for immediate threats. However it can severely punish your opponent if they are not carful. And finally we have a new Resonator to take a look at before we conclude. 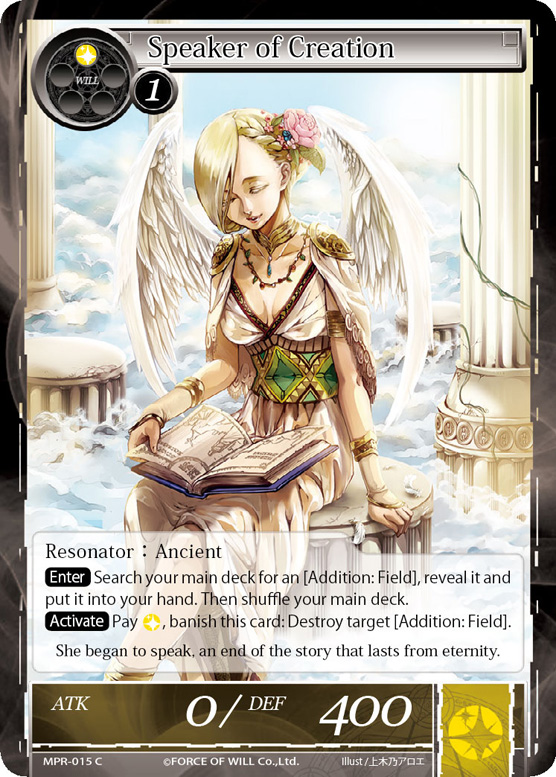 Speaker of Creation is a 2 cost, [0/400] Resonator that allows you to search your deck for ANY [Addition: Field] card. There are a lot of decks that use powerful Field Additions such as Bloody Moon, Necronimcon etc., and any card that adds consistency to those decks is obviously good. In addition, this card also allows you to destroy your opponents [Addition: Field] cards at a cost of 1 Light Will and banishing this card.

This ability is extremely powerful in being able to answer potentially problematic additions. We’ve already seen one Light [Addition: Field] coming out in The Moon Priestess Returns, in the form of Book of Genesis, which can give you a lot of advantage if left unanswered. Time will tell how well these cards synergise and complement each other. Well, that’s all we’ve got for now. Remember to watch this space for more exciting spoiler articles. Don’t forget to put your faith in the light, and we’ll hopefully see you all again soon for the next instalment of Rise of the Ruler. 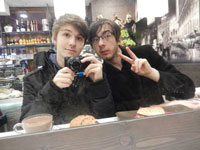